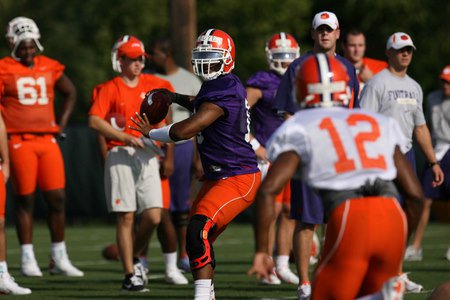 CLEMSON –Quarterbacks and linebackers are two of the most important positions on the football field, and Clemson head coach Dabo Swinney fielded questions about both positions, as well as the young running backs and receivers, as he met with the media Tuesday evening following Clemson’s bowl practice.

Redshirt sophomore Willy Korn announced last week that he has decided to transfer after he graduates in May, leaving freshman Tajh Boyd to battle Kyle Parker for the starting job in the spring, and Swinney was asked if Boyd has a realistic shot at knocking Parker off his perch.

"Come spring, everybody has to compete,” Swinney said. “Everybody competes. There are no guarantees at any position. Kyle has had a really good freshman year, but no one will care about that next year. Every year, you have to earn your position."

Swinney was asked what kind of work Boyd has been getting, and Swinney said it was the work typical of a player third or fourth on the depth chart, although Boyd has wowed defensive players and coaches alike with his efforts on the scout team.

"He's gotten scrimmage work, skeleton work, because we needed to know where he was. Kyle didn't get anything like that when he first got here."

Swinney said that Korn has handled his pending transfer with a “first class” attitude, and he plans on Korn being around during spring practice.

"We'll help him any way possible, he's just first class,” Swinney said. “They don't get any better than Willy. We had the opportunity to address that last Tuesday. I was real proud of how the team responded to Willy. It's not a negative. He's got two years of eligibility and he's going to graduate in May. He wants to be the guy. He's looking for an opportunity. He's had some tough breaks since he's been here.

“In fact, I've asked him to come out this spring and give us another arm. He's going to be here and he needs to stay sharp and work. Hopefully he'll do that and help himself and help us. Nobody has worked harder than Willy Korn. Nobody has sacrificed more than Willy."

Redshirt freshman running back Andre Ellington has impressed with his play behind Spiller, and many feel he will be the starter when the Tigers line up next season, and Swinney said Ellington has been impressive since Day One.

"I talked a lot about Andre back in camp,” Swinney said. “I thought he had a great freshman year. He finished second in the league in yards per carry. He played in this system before and knows inside and outside zone. C.J., it took him longer. Both of those guys were wing-T players. He's had an excellent year. I think we're in pretty good shape at running back with Jamie [Harper], Andre and I'm going to tell you, y'all are going to love Hot Rod [Roderick McDowell, who red-shirted this season.] Rod has put on some weight and has gotten stronger and bigger. You will love those guys. Bryce [wide receiver Bryce McNeal] was 160-something and blowing over, and now he's 180-something. He and Rod have had an excellent fall."

Swinney was asked if he foresees any personnel changes heading into Dec. 27th’s Music City Bowl against Kentucky, and he said that, “we have not made any. We might rep some guys differently, but right now we have our same starters penciled in."

The Clemson linebacking corps has come under the most scrutiny after a two-game stretch that saw the Tiger defense give up 223 rushing yards to South Carolina and 333 yards to Georgia Tech on the ground. The linebackers seemed to play out of position and miss several tackles, and Swinney said that getting the linebackers back on track goes back to playing proper technique.

"We have to have our eyes on the right things, react to what our eyes see, play with the right technique, take proper angles and get off blocks,” Swinney said. “That's where we'd start."