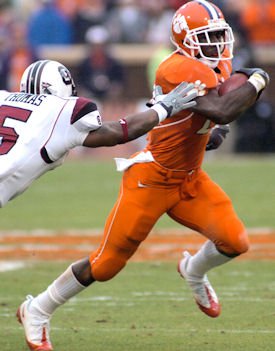 CLEMSON -- Despite being the only player in the nation to score a touchdown in all his team's games this season, Clemson senior running back C.J. Spiller will not being going to New York as a finalist for the Heisman Trophy. Spiller is also the first player in NCAA history with 3,000 yards rushing, 2,000 yards on kickoff returns, 1,000 receiving and 500 in punt returns, but the Tigers' back to back losses to end the season hurt Spiller's chances at the Heisman.

“I certainly wanted to make it to New York for the Heisman presentation, said Spiller. "It would have been great for this football program and Clemson University in general. But, I have done the best I could in every game. I have no regrets.

“I want to especially thank the Clemson fans for their support. I know they came out in great numbers in the fan voting poll (Spiller finished second in that poll) and have been very supportive of me my entire career.

“I want to thank all my teammates, especially the offensive line.

“We have one game left. We have not won a bowl game since I have been at Clemson. The seniors want to go out with a win.”