CLEMSON – Finally. The long-awaited fall football camp began at Clemson Tuesday night with an almost three hour practice that began in bright sunshine and ended under the lights.

Clemson head coach Dabo Swinney said that just like the players, he was more than ready to hit the field.

“That’s the hardest part of this time of year,” Swinney said. “It just drags. It seems like it just takes forever to get here, to get started. I was fired up yesterday for the guys to officially report.”

The Tigers did a lot of walk-through preparation at the beginning of practice, apparently going back through the playbook, but quickly escalated into a serious practice that saw high energy on both sides of the ball.

”It was a good practice, there was good energy out there today,” Swinney said. “The most impressive aspect of practice was the retention. The retention was very good on both sides of the ball, very good on the defensive side. I’m really proud of those guys. You do a lot in the spring, and you can only hope it carries over during the summer.”

Tuesday was the first of 29 preseason practices for the Tigers, who open at home against Middle Tennessee on September 5 at Clemson Memorial Stadium. Clemson will practice once in the late afternoon or evening this week, then will have two practices next Monday.

In the highly-anticipated quarterback battle, Swinney had both Kyle Parker and Willy Korn take turns with the first-team offense, with Michael Wade and freshman Tajh Boyd also seeing time behind center in what figures to be the burning question of the camp. 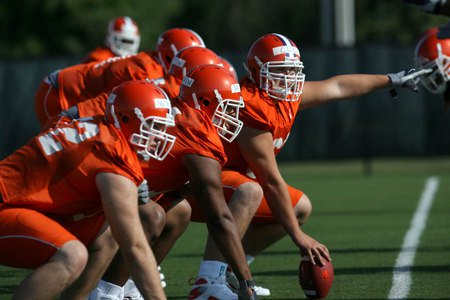 Tiger tight end Michael Palmer said he was glad to put the summer workouts behind him and actually get on the field with the season opener in sight.

”Everybody gets anxious toward the end of summer,” Palmer said. “It always feels good to get back out there and running around, yelling at the defense a little bit more, and just have fun out there. We have worked really hard this summer, and we know it will pay dividends because you reap what you sow.”

Korn said he was also ready to get between the lines and get started on the season.

”Everybody was ready to get back out here and play some organized football,” Korn said. “There was a real buzz in the locker room, and guys weren’t moping around, and putting their pads on saying ‘Oh no, we’re back in camp.’ Everyone was really excited and ready to get started. The defense looked tremendous tonight, and it will be fun to watch them play.”

Swinney said that while he was pleased with the practice, it was still just the first of many and everyone has to realize there is a lot of work to do.

“We still have a lot of work to do and there were some things I was not pleased with,” Swinney said. “We have to learn how to practice in shorts these first five days. But there was a lot of excitement out there. But, I have been anxious for this day. You reach a point during the summer when you look at film and go over everything you can without going to the practice field. Today it finally arrived and it was great to get started.”

Freshman offensive tackle J.K. Jay was the only player in a yellow jersey at Tuesday’s practice. He sat out with a back injury, but did do some running on the side. He suffered the injury in mid-July while lifting weights, and Swinney said that Jay got a shot this week and the staff will have to see how he responds. Swinney said that if Jay has to have surgery, the recovery period would be four to six weeks. “At that point, it would be hard for him to help us this season. But we’ll see how it goes.”