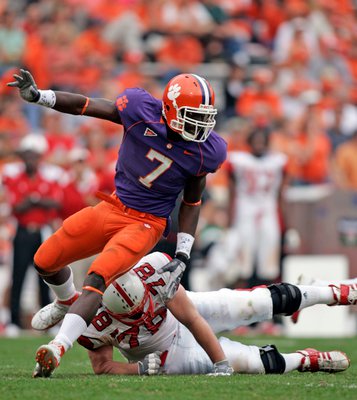 Clemson defensive end Ricky Sapp walked into the hotel Sunday morning at the ACC Football Kickoff Meetings, and it was obvious that this was not the same Ricky Sapp that ended last season on the sidelines with a torn ACL.

The first thing noticed was that this Ricky Sapp is bigger and -stronger than he was last season, and the second thing was the knee is apparently giving him no problems, which Sapp confirmed by saying that he is ahead of schedule and will be ready when the Tigers take the field in the opener against Middle Tennessee on Sept. 5th.

”I am feeling pretty good right now,” Sapp said. “We have very good trainers, and I went every day and worked out and did the rehab, never missed a day. Right now, I should be at about 85 percent, but I am really at 95 percent. I did all the extra stuff, and worked really hard, and did a lot of the work in the weight room. Right now, I think I'm back where I was a year ago in terms of explosiveness."

The senior from Bamberg suffered a deep knee bruise in the Tigers’ opener last year against Alabama, and he now admits that coming back after missing just the N.C. State game was probably a mistake.

”After the first game, I should have sat out the next three or four,” he said. “Coming back early hurt me. I sat out one game, and I really should have sat out three or four and come back healthy. But I wanted to play for my teammates, and run down the hill, and play for the best fans in the world. But I am hard-headed, so that is why I got hurt.”

Sapp played the next several weeks at less than 100 percent, and then suffered a torn ACL in the 10th game of the season, at Virginia, and was lost for the final three games of the year. Now, he says, he is ready to get back out on the field and do what he does best.

”My teammates have been sweating and bleeding without me, and I am ready to get back out there,” he said. “I am not nervous at all about getting back out there, because I know my knee is stronger now than before I got hurt. By the end of August, I will be at 100 percent, and getting out there again is going to be really special. I haven’t played in so long, and it was very hurtful {last season} having to watch what was going on.”

In addition to the rehab on the knee, Sapp took the extra time to work on his upper body strength so he can be more of a force in the running game, and as a result is now the biggest he has been since he came to Clemson.

”I am definitely bigger and have gained some muscle since last season,” Sapp said. “I am 250 pounds right now, which is probably the biggest I have been since I have been here, but it is all good weight. I really honed my upper body, and gained weight, so I am bigger and stronger.”

The extra upper body strength will come in handy this season as Sapp steps into more of a linebacker role in Kevin Steele’s defense. Last season, Sapp played the “bandit end” and used as more a pass rusher who sometimes dropped into a zone coverage scheme. Under Steele, Sapp will sometimes line up as an outside linebacker, a position that many NFL scouts seem him playing on the next level.