CLEMSON -- If Clemson hasn't looked like a contender for the national championship, it does now.

The Tigers (6-0 overall, 4-0 Atlantic Coast Conference) defeated N.C. State (4-1, 1-1), 34-27, in front of 82,000 at Death Valley Saturday. Clemson survived its first test of the season with the Sears National Championship trophy sitting near the field. The trophy's presence didn't get past Clemson coach Tommy Bowden, who didn't flinch when he was asked if his team could contend for the national championship.

"I just told them to look at, just in case," said Bowden.

Somehow, Saturday's win might have justified Clemson's presence in the top-five and it certainly wasn't a wasted trip for the trophy.

The Tigers survived a hot-shot freshman quarterback, who had a chance to defeat the Tigers with a last-minute drive.

N.C. State's Phillip Rivers, who had already thrown for three touchdown passes of over 50 yards during the game, tried for the end zone on fourth-and-3 at the Clemson 18-yard line with 3:28 left in the game.

Clemson defensive back Charles Hafley got inside position on tight end Willie Wright and knocked the ball down in the right side of the end zone.

Clemson's offense ran out the clock and survived it's toughest test of the season by far. Clemson's closest game so far had been a 21-point win at Virginia, and the Tigers' hadn't won a game decided by a touchdown or less in three years. That monkey is off the Tigers' back. 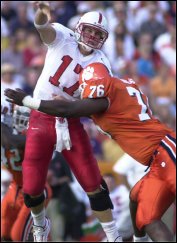 "If you want to win, a lot of good teams will have to go through something like this and have a close ballgame," said Bowden.

This game never had the look of a blowout, even though Clemson led by two touchdowns midway through the second quarter.

Rivers, on the third play of the game, threw a swing pass to Ray Robinson. Four Clemson defenders chased Robinson down the left sideline. Robinson raced a total of 81 yards for a touchdown with 13:58 left in the first quarter.

Rivers finished with 370 yards passing, but most of the day had to worry about a heavy rush from the Clemson defensive line. Clemson sacked him twice, but he had to scramble out of the pocket numerous other times.

For the first time this season, after Robinson's touchdown, Clemson trailed, but it didn't last long.

Clemson drove 73 yards for a touchdown on its first drive of the game. Holder Jeff Scott ran for nine yards and a first down on a fake field goal from the N.C. State 21-yard line. Three plays later, Woody Datnzler Dantzler scored on a sneak with 9:03 left in the first quarter.

N.C. State punted to midfield and Clemson drove for another touchdown.

From the 24-yard line, Dantzler found Travis Zachery wide open near the endzone. Zachery's touchdown reception gave Clemson a 14-7 lead with 6:36 left in the quarter.

Midway through the second quarter Clemson scored again on a 1-yard sneak by Dantzler. Clemson led 20-7, but N.C. State didn't go away.

N.C. State's Kent Passingham kicked two field goals to cut into Clemson's lead. The Tiger led 20-13 at the half.

After a Clemson touchdown early in the third quarter, N.C. State scored on its next possession to cut into Clemson's lead.

Rivers avoided a sack and escaped to his right. He found Bryan Peterson just in time to avoid another set of Clemson pursuers. Peterson took the pass at the 20 and ran down the left sideline for the touchdown to cut Clemson's lead to 27-20 with 9:05 left in the third quarter.

On Clemson's first drive of the fourth quarter, the Tigers went up again by two touchdowns. Clemson started at the N.C. State 39 and quickly drove for the touchdown. Travis Zachery ran for 2 yards on fourth-and-2 at the Wolfpack 27. On third-and-4 at the 21, Dantzler completed a 16-yard pass to Rod Gardner. On the next play, Zachery scored on an 8-yard run with 13:09 left in the game.

N.C. State responded quickly. On the second play of the next drive, Rivers completed a 63-yard touchdown pass to Koren Robinson. Robinson ran past Clemson defensive back Darrel Crutchfield and caught the pass in stride at the 20-yard line near the left sideline. He ran the rest of the way untouched.

N.C. State got the ball with 6:35 left in the game after a field goal attempt by Clemson was blocked. The Wolfpack moved from its own 20 to the Clemson 18 in 11 plays. Rivers threw two incomplete passes before he faced fourth-and-3.

He then threw to the endzone and the pass was knocked down by Hafley.

"This will really help our players from the mental standpoint," said Bowden.