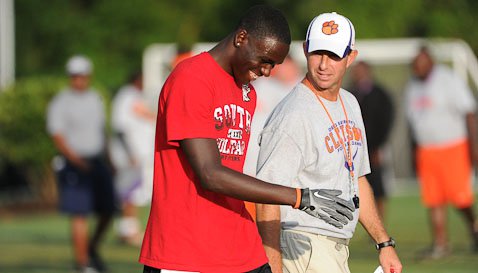 Kearse enjoys a moment with Dabo Swinney at Clemson's camp.

Jayron Kearse
Safety
6-4, 205
Fort Myers, FL
View Full Profile was supposed to announce his college choice on Friday, but his decision was moved to Thursday because of scheduled fire drills at his school.

The irony of that situation shouldn’t be lost on anyone, because Kearse announced that he wanted to attend Clemson – the Tigers’ 17th verbal for the 2013 recruiting cycle. He is the second 4-star prospect to commit to Clemson this week, and the Tigers’ recruiting is definitely on fire right now.

Kearse hails from South Fort Myers (FL), the same high school as Clemson’s Sammy Watkins, and he said his relationship with the coaches played a huge role in his decision.

“I chose Clemson because the coaches are genuine people,” Kearse told TigerNet. “They care about their athletes, and Clemson is just a great place to be with a group of guys who all want the best for you.”

His head coach at South Fort Myers – Grant Redhead – said the announcement had to be moved up a day.

“We were actually going to do it tomorrow at the school,” Redhead said. “But with all the things we do – the fire drill and the crisis drill – they planned one for 3 p.m. People were going to come in and out of there screaming at us, so we weren’t able to do it. So I asked him if we could postpone it and do it later. He was really good about it. But he just kind of wanted to go ahead and commit today, and I told him that if he wanted to do it, do it.”

Kearse was committed to the University of Miami, but de-committed after a visit to Clemson for Dabo Swinney

“The camp really helped me make my mind up,” Kearse said. “Just getting up there, seeing the coaches and seeing how great the place looks and having a comfortable relationship with some of the players helped me with my decision.”

Kearse said he called Swinney with the news, and Swinney was understandably excited. He also said he was done with recruiting.

“I told Coach Swinney, and he said when he got off the phone with me he had to run up the halls and do some cartwheels,” Kearse said. “And yes, I am done with recruiting. Clemson is the place I want to be.”

Kearse will play safety at Clemson, and may start out in the hybrid safety/weakside linebacker role that Travis Blanks will occupy this season.

“He really didn’t have a bad decision,” he said. “Jayron is one of the top defensive prospects coming out. He is going to have plenty of time on that side of the ball this season, since he has transferred over. The way we play our defense, he is going to be a huge factor in it, especially at WILL linebacker and strong safety. He is going to play where he will play in college, I can tell you that.”

As a junior at Cypress Lake, Kearse rushed for 1,473 yards and 17 touchdowns on offense, while adding 35 tackles and two interceptions on defense.