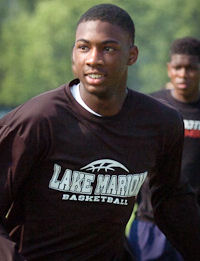 Wide Receiver
B I O
As a junior, he had 66 receptions for 1296 yards and 11 touchdowns and was named 2011 T&D All-Area Player of the Year. As a sophomore, he had 42 receptions. He prefers to play football close to home. Clemson's recruiter of record are Jeff Scott and Marion Hobby. He was Preseason Elite 11 watch list selection by the Orangeburg (S.C.) Times and Democrat. Clemson offered Williams on May 18th, 2011. He attended camp at Clemson on June 15th, 2011. He took an unofficial visit to Clemson for the Clemson-Wake Forest game.

He is a huge receiver with big hands and great ability on jump balls with smaller defensive backs. He has a long wingspan, leaping ability and a large frame. He reminds some people of a young A.J. Green. He has the chance to be a main weapon in the redzone for Clemson.