According to the site, Auburn Undercover, Charlie Harbison

UPDATE: TigerNet has been able to independently confirm that Harbison is leaving the Clemson coaching staff for Auburn. There is no word yet if he will coach for Clemson in the bowl game.

Harbison will be named as Auburn's co-defensive coordinator and defensive backs coach. 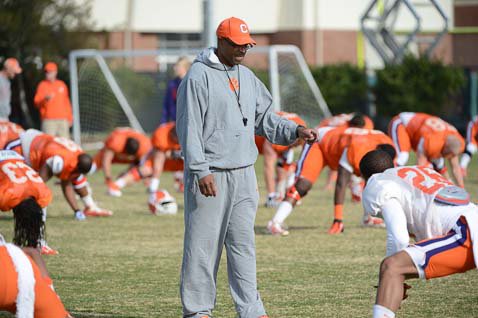 • In his second tour of duty at Clemson. He served as defensive backs coach under Head Coach Tommy West from 1995-97.

• Coached first-team All-American DeAndre McDaniel in 2009 and 2010. McDaniel led the ACC and was tied for third in the nation in interceptions (8) in 2009. He was also named First-Team All-ACC both seasons.

• Helped Clemson to a top-25 final ranking and the ACC Atlantic Division title in 2009. Clemson had 21 interceptions, fifth-most in Tiger history and tied for fifth-most in the nation. Clemson was #7 nationally in pass defense.

• Coached great players in the 1990s at Clemson, including eight-time Pro Bowl selection Brian Dawkins. He was an All-American and led the ACC in interceptions in Harbison's first year at Clemson (1995).

• Has had two tours of duty at Alabama (1998-00, 2003-06). He helped Alabama to five bowl games in seven total years, including the 1999 season when the Crimson Tide won the SEC title and played Michigan in the Orange Bowl. Alabama finished ranked #8 in the nation that year. He coached defensive backs in his first tour of duty and wide receivers the second time around at Alabama.

• Started his coaching career at Gardner-Webb in 1984.

• Has experience coaching in the Arena Football League and World League of American Football.