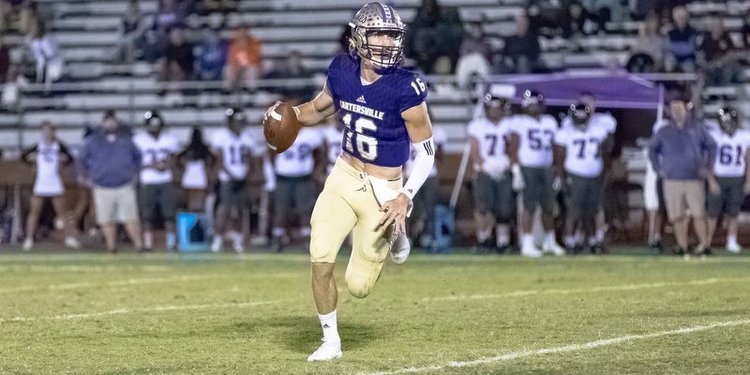 Lawrence surpassed a Deshaun Watson record for the second time in as many games.

With two touchdown passes against Troup County (Ga.), Lawrence’s four-year run at Cartersville (Ga.) surpassed Deshaun Watson’s four-year run at Gainesville in passing scores, with 156, topping Watson for a Georgia state record for the second time in as many games.

Last time out versus Chapel Hill (Ga.), Lawrence topped the 13,000 passing mark to move to No. 1 all-time past the former Clemson and current Houston Texans quarterback.

Lawrence has thrown for nearly 3,000 yards this season, with most of his action coming in the first two quarters of blowout wins. He's passed for 36 touchdowns to one interception.

The 6-foot-6 prospect recently reflected on his run at Cartersville.

“I didn’t have a guaranteed spot when I came up and I had to work for that,” Lawrence told Maxpreps before the game about his freshman season. “We knew after (my freshman year) that we were only going up from there. That next year we had a great team again and brought back a lot of starters and went undefeated. Then went undefeated the next year.

“That’s just kinda the expectation now to go undefeated and win the state championship. Coach King has built the brand of Cartersville since he got here with that expectation.”

“I’m confident in that with how we’re working and the leadership with coach King and the other coaches,” Lawrence said “I think we’re going to stay on track and stay focused. I’m pretty confident that we will. But we’ll see how it ends up.”

As sure as the sun will rise, @Trevorlawrencee will toss a TD pass! Showing you why he owns the @OfficialGHSA books. https://t.co/qZeLJKQuUb pic.twitter.com/o30fXyWgDM