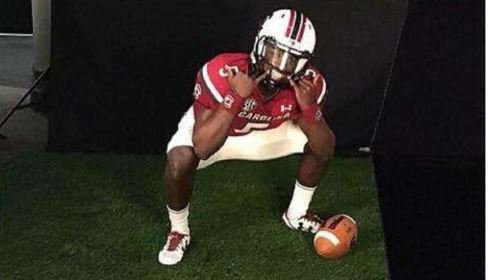 South Carolina quarterback commit Dakereon Joyner is pretty confident in his abilities on the gridiron.

On Tuesday, he boldly claimed that he would not lose to defending National Champion Clemson while at South Carolina.

"I promised myself to never lose to Clemson as a starting QB at South Carolina...NEVER! They gone feel what they missed out on I promise ya'll!" Joyner posted on social media.

You have to love the confidence of the young signal-caller but I would imagine that he will be stuck behind Jake Bentley at the position for the next few years.

He follows in the footsteps of former South Carolina defensive end Jadeveon Clowney who made the same promise coming out of high school. Clowney's promise was prophetic as he was 3-0 against the Tigers as the Gamecocks star defender.

Clemson was Joyner's favorite school throughout the recruiting process, but the Tigers had other higher profile quarterbacks committed or on the roster and offered Joyner as an athlete instead. Joyner wanted to play quarterback in college so he donned the Garnet and Black and apparently now has a large chip on his shoulder against the Tigers.

The Clemson vs. South Carolina rivalry will start up again on Saturday, November 25 at Williams-Brice Stadium.

Joyner says he will never lose to Clemson ???????? pic.twitter.com/KR7CwMWvd8

In 2014, he was 43-92 for 3 touchdowns and 2 interceptions and also ran for 231 yards and a touchdown and had four receptions for 26 yards. He was named after the season as a 2014 MaxPreps Freshman All-American.

Joyner is regarded as one of the top players in the state with Xavier Thomas, Josh Belk, and Stephen Wynn for the 2018 recruiting cycle.

He plans to enroll at South Carolina in January of 2018.