Had a great day with Urban Meyer and coach Herman and received an offer to play at "THE" Ohio State University!!! #buckeyes #hoyanation 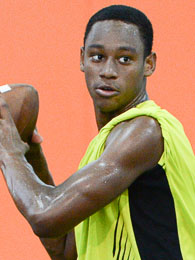 Clemson offered on 6/12/13 while he was attending the Dabo Swinney football camp.

Justyn Ross speaks out ahead of surgery, says he will 'shock the world'