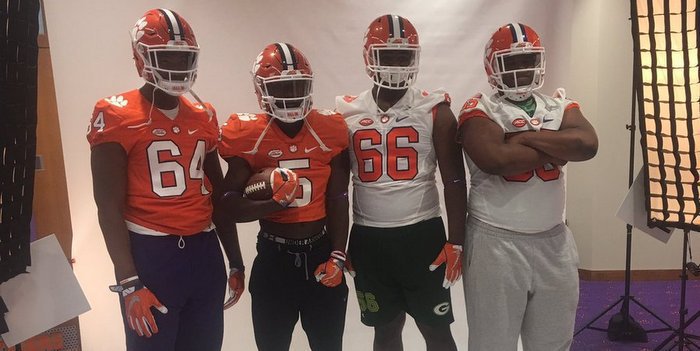 The recruits pose for pictures Saturday

Clemson's coaching staff hosted many of the nation's top players from the 2018, 2019 and 2020 recruiting cycles Saturday afternoon, with close to 90 prospects on hand.

Saturday marked the second major recruiting day for the coaches, who also hosted a smaller group of juniors at the end of January. The January date included some of the committed prospects, but Saturday was created so a bigger group of prospects could visit the campus and the new Reeves Football Complex.

Several of players took to Twitter to talk about the day:

Beyond blessed to say that I have received an offer from Clemson University ???? #NationalChamps #WRU ???? ?? pic.twitter.com/KJMPh9fwv2

Awesome to meet @CoachToddBates. Awesome day with all the coaches. @ClemsonFB loved the facilities and the slide??I will back soon! pic.twitter.com/dU4rCXWNsS

Guess you can say my mom enjoyed the visit today ???? pic.twitter.com/yicbNwtLhD

Had a nice time at the Clemson Jr day pic.twitter.com/0OmMNlQJZD