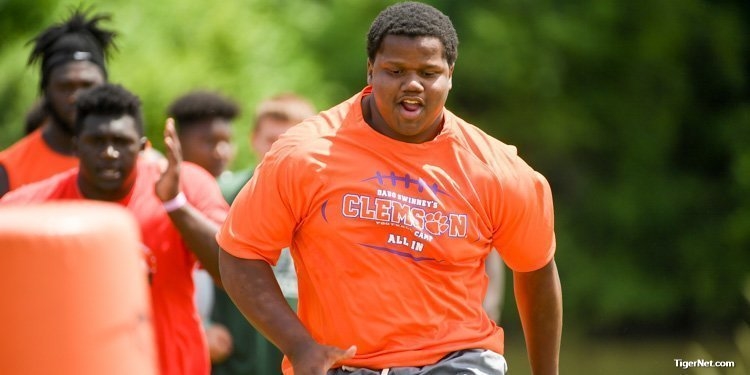 "First of all I'd like to thank God for everything he's done," Davis said in an announcement Wednesday. "I'd like to thank my dad and mom...Everybody who has supported me. It's just a blessing to be up here. With that being said, I'll be going to...Clemson."

“My decision weighed heavily on just how [the coaches and players] responded to me and everything," Davis told the Orlando Sentinel. "I felt more comfortable with Clemson. They’re both family oriented and it was very difficult. I really like [FSU] Coach Odell [Haggins] and Coach [Willie] Taggart, but for me I thought Clemson was the best choice for me.

“I feel like I connect better with their players and I like coach Dabo [Swinney] a lot and I like Coach [Brent] Venables the defensive coordinator and the D-line [Todd Bates]. I feel like I just like what they’re doing right now.”

He is rated as high as a top-100 prospect (60) and the No. 7 defensive tackle in the nation. Florida State and Ohio State were considered two of the other top schools involved.

Clemson moved up to No. 5 in the 247Sports Team Composite Recruiting Rankings as of 8:45 a.m.

The Wekiva High School (Fla.) product was named the Class 8A defensive player of the year and first-team All-State last season and picked up defensive line MVP honors in ‘Opening’ regionals this offseason.

Davis has posted 12 tackles for loss, five sacks and an interception with 29 total stops this season.

Brings to Clemson: After that All-State junior campaign, Davis went on to show out on the offseason combine circuit and impress a bunch of coaches along the way in summer camps, including on a trip to Clemson this summer. Davis plugs the middle well with his measurables but is also adept in sliding by offensive linemen with ease to storm into the backfield and make plays. Davis’ highlight reel has feel of a Grady Jarrett - just a bit bigger and every bit as explosive or more off the line. Clemson coach Dabo Swinney compared Davis to Dexter Lawrence during Clemson's Signing Day show Wednesday.

Depth chart fit: With three departures expected at defensive tackle, Davis can make an instant impact in 2019. Davis joins DT signee Tayquon Johnson on the interior, as well as a number of D-line signees who can play either inside or outside in this class.

Number to know: 7 - Davis, counting three more in the 2019 class, is a seventh 4-star or higher rated prospect signed by Clemson out of a Florida high school in the last three classes.

GREAT DAY TO BE A CLEMSON TIGER?? Welcome Tyler Davis to the Clemson Family!!! #FL2CU #ALLIN

Blessed to be #ALLIN pic.twitter.com/ABJptm42uH