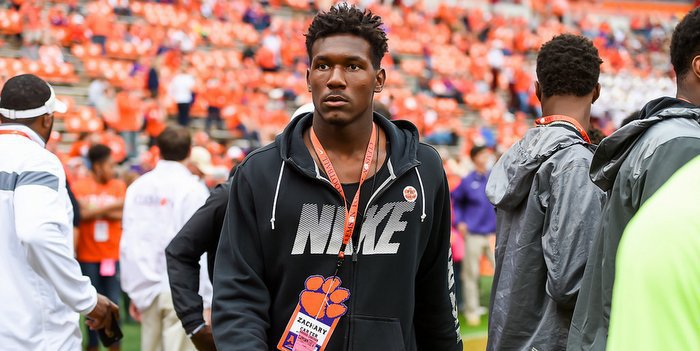 "First of all, I would like to thank God for blessing me with the abilities to play the game I love," Carter tweeted. "I also want to thank him for the positive people in my life that helped me get me to this point. Thank you to all the coaches and the schools that gave me an opportunity of a lifetime. This ride has been crazy and I definitely wasn't expecting this to happen in my life because of what I have had to overcome to get to this point, but I am now ready to share with you all what University I will be attending the next 3-4 years. I am announcing that I am officially committing to the University of Florida which has been a dream of mine since I was a kid."

Carter's top four schools have been reportedly Clemson, Florida, South Florida and Tennessee and the main factors in his recruitment were academics and family atmosphere.

The 6-foot-4, 250-pound defender is a consensus 4-star defensive end recruit by all the major recruiting services.

Clemson coaches that had a hand in recruiting Carter were Tony Elliott, Marion Hobby, and Brent Venables.

TigerNet spoke with Carter recently and he had the following positive things to say about Clemson.

"I thought the campus was beautiful,” he said of his previous visits, "and all the facilities were up to par. And I know they're building another big facility (the $55 million football complex, scheduled to open in 2017), so that's exciting."

Carter would like to pursue a career in broadcast journalism.

"I want education to be up to par wherever I go," Carter said. "I'm a hard worker, so wherever I go I know the school is getting a hard worker and a high-character kid. … I stay out of trouble,” he said. “And I think I could make an impact on the team that I go to."

Carter was in attendance for several sessions at the 2016 Dabo Swinney Camp and Clemson's 23-13 win over Florida State in Death Valley last season.

He recorded 76 tackles including 10 for loss, 5.5 sacks, and three pass breakups last season.

I hope the bro chooses to be a tiger?? no matter what all love though ?? @_ZachAttacks