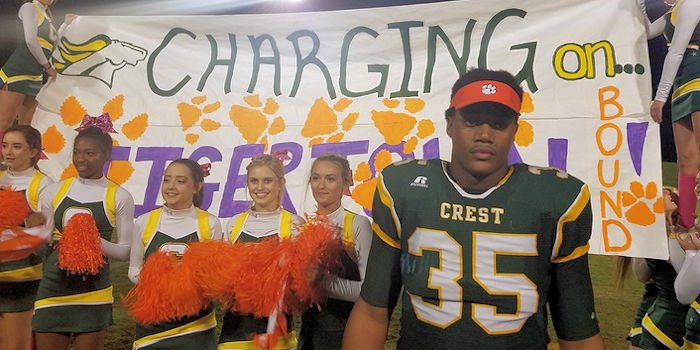 4-star 2017 outside linebacker Justin Foster from Shelby, N.C. chose Clemson over his other finalists Georgia and Tennessee at halftime of the Shelby-Kings Mountain high school football game on Monday night.

"They stuck with me from the beginning, no matter where I went to go to visit," Foster said to TigerNet's David Hood. "They were recruiting me the hardest and Dabo was a man of his word during the whole recruiting process."

"I would like to thank all the coaches that gave me this opportunity," Foster tweeted on Monday night. "I have really enjoyed the recruiting process but I have found my home. I will be continuing my football career at the University of Clemson!!"

"First of all, I would like to thank God for blessing me with the ability and talent to play the game and also for putting me in the position to make the choice in where I will spend the next four years," Foster tweeted back in May. "This recruiting process has been a long journey and I would like to thank all the schools that have given me the opportunity to further my football career."

Foster is a consensus 4-star recruit by all the major recruiting services and the #1 player in the state of North Carolina for the 2017 cycle. He is a huge get for the future of the Clemson linebacker core (might eventually outgrow the position however) as they appeared stacked with talent with Justin Foster, Shaq Smith, Tre Lamar, and others all waiting in the wings.

He was recently in attendance for the epic battle between Clemson and Louisville.

It is the 14th commitment for Clemson's impressive 2017 recruiting class.

Foster is also an exceptional basketball player as he was ranked as the #8 player in North Carolina by BigShots.net.

Justin Foster wearing his Clemson visor. He told me Clemson stuck with him from the beginning. His first offer pic.twitter.com/vjzXVwDFLE

Congrats to @Fosterkiddddd Clemson is getting a great football player and a better young man pic.twitter.com/p8ryEUpNj3