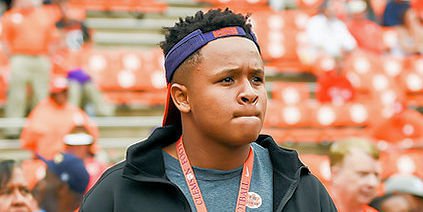 3-star 2017 offensive lineman, Eric Douglas from Charlotte, North Carolina (Mallard Creek HS), has Clemson in his top group on Sunday afternoon according to his Twitter account.

Douglas discussed his top group of schools via Twitter.

"Thank you to all the 15 schools that have blessed me with an opportunity to play at their university!! But after praying with my family, coaches, and close friends I believe these seven schools present me the best opportunity to not only play to do what I love, however present me with a social, academic, and the best opportunity after football is over!! These schools are the ones I will be focusing on the most in making my visits with I will commit!! With that being said here it is..."

He participated in the 2015 Dabo Swinney Football camp and received a Clemson offer which was his second offer overall. Clemson's recruiter of record for Douglas is Danny Pearman.

As a sophomore, he started at left tackle for Mallard Creek's second straight NCHSAA 4A title.

He plans to major in a field related to broadcast journalism, and his father was a two-time all-conference football player at S.C. State.