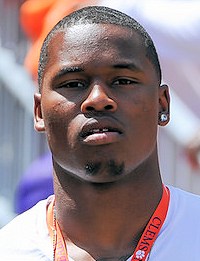 Smith explained his reasoning via his Twitter account. "It is with a heavy heart but clear conscience that I announce that I have decided to de-commit from Clemson University and reopen my recruiting process. With all due respect to Coach Swinney, Coach Venables, and the entire Clemson staff and community, at this time this is just what's best for me and my recruiting down the line. After speaking with Coach Swinney I fully understand the protocol for committed prospects wanting to visit other schools officially. Due to my need to explore all of my options and make sure that wherever I sign is 100% where I want to attend, I must take other visits. Since this is not allowed by Clemson, I have made my decision. I will however still visit Clemson at a date TBD. I ask at this time that all who are concerned in this matter would please respect my decision. I will not be conducting or accepting any interview request or giving any further explanation. God Bless Us All."

Smith plans to take official visits to the following schools: Auburn (Nov. 14), Clemson, LSU (Oct. 17) and Miami according to ESPN's Gerry Hamilton. He might take a fifth official visit as Alabama and Kentucky are two schools in the running.