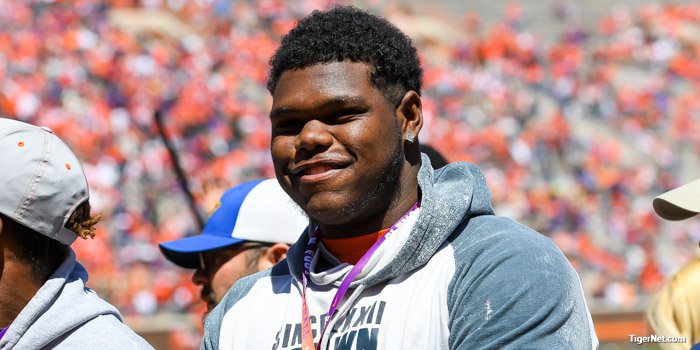 Four-star defensive tackle Josh Belk out of Richburg (SC) Lewisville committed to Clemson Saturday during an official visit, and he made the news public Sunday morning.

Belk called TigerNet with the news and later tweeted out his decision.

"What an extreme honor and a priviledge it has been to visit various colleges who have shown an interest in me, Belk tweeted. "Thank you to each of you. I am grateful and humbly blessed more than any words could ever express. The faculty and staff at each university have been kind, professional and respectful towards my family and I. The decision to commit to a college has not been something that I have taken lightly. After much time and prayful debate with my family, I am excited to announce that Clemson University is where I will seek to expand my education. Again, I thank each and every one of you for your time and willingness to help me achieve my goals. Your support is greatly appreciated. Respectfully, Josh Belk."

"I've never had a connection with someone right off the bat like that," Belk said. "Every time I go up there, there is just this family feel, and it really makes a difference. They showed me how I can succeed in life and not just football."

He becomes the fifth commitment for the 2018 recruiting cycle and the second from Saturday's Junior Day. Athlete Derion Kendrick broke the news of his commitment Saturday night. With Xavier Thomas moving to IMG, Clemson now has commitments from the top two rated players in the state of South Carolina for 2018 in Kendrick and Belk.

Clemson offered in June of 2015 while Belk was attending the 2015 Dabo Swinney Football camp. South Carolina was the first to offer.