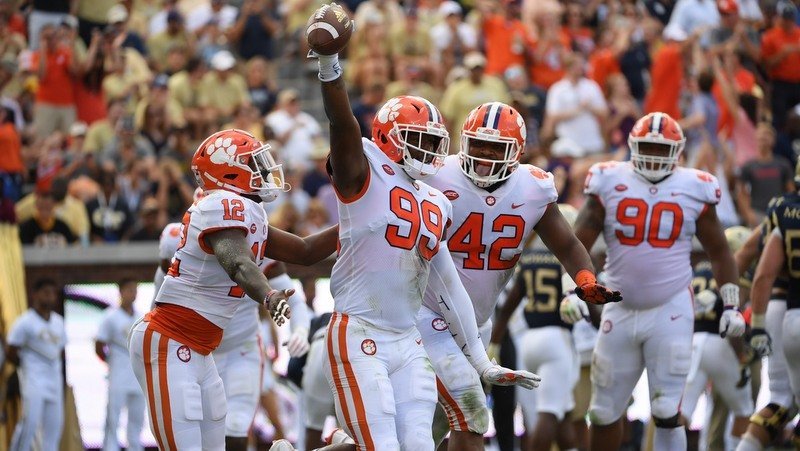 ESPN's 'draft guru' Mel Kiper Jr. released his 2019 NFL Draft Board on Thursday and had two Clemson defensive linemen included in the top 18.

Defensive end Clelin Ferrell was chosen No. 6 overall (previously 5) and the No. 2 DE behind Ohio State's Nick Bosa (1).

"I thought Ferrell could have been a first-round pick in the 2018 draft, when he was a third-year sophomore," Kiper said. He's that good. He had 9.5 sacks last season and is up to six in six games this season. He terrorized Texas A&M and Georgia Southern with two sacks apiece and multiple pressures. Clemson has one of the most talented defensive lines I've ever seen in college football, and Ferrell is the top prospect."

For the season, Ferrell has registered 27 tackles including 10.5 tackles for loss, six sacks, five quarterback hurries, one forced fumble, and two pass-breakups.

Defensive tackle Dexter Lawrence was rated No. 20 overall (Previously 11) and the No. 6 rated DT.

"As I wrote in my way-too-early Big Board, big-bodied guys who move like Lawrence and can eat gaps don't last long in the draft," Kiper said. "And Lawrence has shown that he is more than a plugger -- he had nine sacks in his first two seasons. Turn on the tape, and Lawrence takes on blockers and throws them aside. He hasn't made a huge impact this season, however, as he has only 12 total tackles and one tackle for loss in six games."

Lawrence has recorded 18 tackles including 1.5 tackles for loss and eight quarterback pressures in 2018.

Defensive tackle Christian Wilkins was rated No. 18 overall previously but fell off this round of Kiper's draft board.