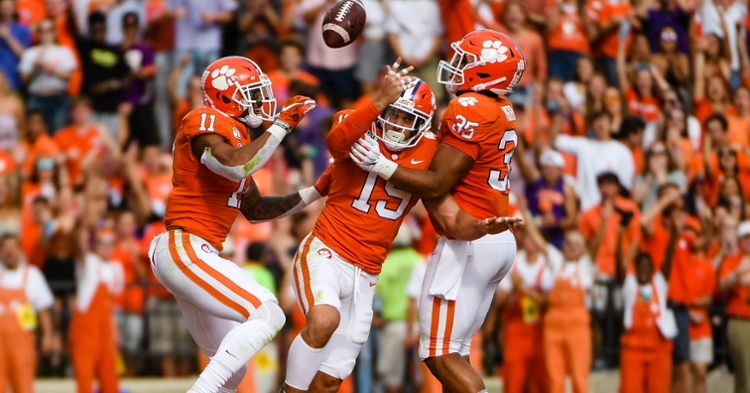 Former Clemson safety Tanner Muse was selected No. 100 overall by the Las Vegas Raiders in the 2020 NFL Draft on Friday night.

Blessed is an understatement ????

On Tanner Muse: `The goal for him Day 1 is to be a core special teams player.' . . . he will learn Mike and Will LB positions.

Mike Mayock said he watched Tanner Muse while studying the Clemson players the Raiders in 2019 and saw him chase down a screen from behind and knew back then that he was a Raider.

With the 100th pick in the #NFLDraft

The @Raiders select Tanner Muse out of @ClemsonFB pic.twitter.com/xI73qAJ2b9

#Raiders get a versatile defender out of Clemson.

No, not Isaiah Simmons. Tanner Muse!

"Tanner Muse knocked his Zoom meeting out of the park." - Mayock

Sounds like #Raiders were drafting a lot with special teams in mind too. Henry Ruggs to return kicks, Lynn Bowden to return punts, Tanner Muse as coverage/gunner guy.

Tanner Muse... our poor man's Isaiah Simmons. Safety who many say translates to LBer. Or does he? ??

In 15 games, he had 73 tackles, five pass breakups, and four interceptions. Takes on blocks and attacks downhill. Excellent hitting power.

Raiders draft pick Tanner Muse sees his role as a rookie as being a "special teams war daddy." I have a feeling fans are going to love that.

Tanner Muse says he and Clelin Ferrell are basically best friends and he stayed connected to the #Raiders through relationships with Ferrell as well as Hunter Renfrow. #Clemson

The Alabama team Clemson defeated by 28 points in National Championship game at end of 2018 season had seven first rounders and 15 players who were top 100 picks....so far. Still have next year to add.

Who knew we'd be able to use this video two years in a row? pic.twitter.com/BxhMcDTWJd