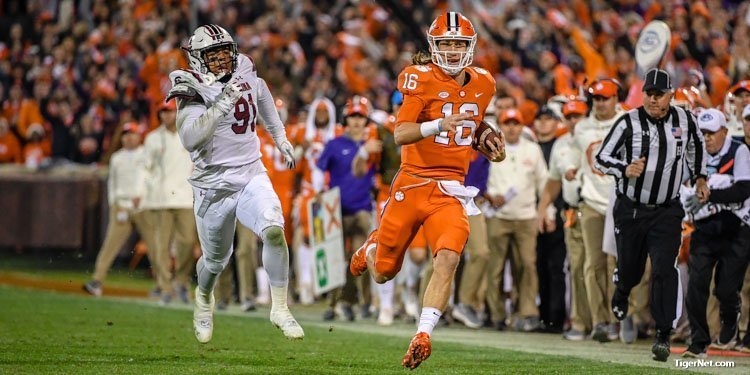 Lawrence earned his fifth ACC Rookie of the Week honor.

GREENSBORO, N.C. (theACC.com) – The Atlantic Coast Conference Football Players of the Week have been recognized following their performances in Week 13 of the 2018 season. The selections are determined by a vote of a 15-member media panel. The following are this week’s honorees:

Dungey accounted for 396 yards of total offense and all six Syracuse touchdowns to lead the Orange to a 42-21 victory at Boston College • He was 21-for-34 passing for 362 yards and three TDs and rushed 18 times for 34 yards and three scores • Dungey set a new Syracuse season record for touchdown responsibility with 32, eclipsing the old mark of 30 established by Donovan McNabb in 1998 • Dungey’s 362 yards through the air marked his 11th 300-yard passing game and his second this season • The ACC Quarterback of the Week selection is his fourth of the season.

Gallaspy tied a school record with five rushing touchdowns in the Wolfpack’s 34-28 overtime win at North Carolina on Saturday • The five rushing touchdowns in a game are the most by any player in a Power 5 conference this year and tied for the most ever against UNC (most since 1975) • Gallaspy rushed for a career-high 129 yards on 27 carries (4.8 yards per carry) • One of his touchdowns came on a season-best 34-yard run.

Carney rushed a career-high 31 times for a career-best 223 yards and two touchdowns in Wake Forest’s 59-7 win at Duke • Carney scored on runs of 5 and 12 yards • Rushed for 118 yards in the first half and 105 in the second half • It was his third 100-yard rushing game of the season and the fifth of his career.

Higgins gained a season-high 142 yards on six receptions, including a 22-yard touchdown catch, in Saturday night’s 56-35 win over rival South Carolina • It marked his third 100-yard receiving performance of the season • Second ACC Receiver of the Week accolade of 2018 for Higgins, who was previously recognized Sept. 10.

Graded out at 93 percent with four knockdown blocks in the Tigers’ 56-35 win over South Carolina • Helped power Clemson to its third-highest single-game yardage total in school history, eclipsing 350 yards both passing and rushing in the contest.

Walker had seven tackles, including two for loss, one QB hurry and one forced fumble in Virginia Tech’s 34-31 overtime victory over Virginia on Friday night • Walker’s seven stops ranked second on the team • With UVA driving early in the second quarter, Walker forced a fumble at Tech’s own 12-yard line that was recovered by LB Dax Hollifield • Assisted on a tackle for loss at the Hokies’ 11-yard line late in the fourth quarter that helped hold UVA to a field goal later in the drive.

Guthrie tied his career high with 12 tackles, including one for a loss, in Syracuse’s 42-21 victory at Boston College • It was Guthrie’s fifth double-digit tackle game of the season, and his third game with a minimum of 10 tackles in the Orange’s last four contests • The Eagles managed just 105 yards on the ground, well below their season average of 196.7 yards per game coming into Saturday’s contest • The ACC weekly honor is Guthrie’s second of the season.

Cisco tallied six tackles and two passes defended, including an interception, in Syracuse’s 42-21 victory at Boston College • Cisco’s pick of quarterback Anthony Brown late in the fourth quarter was one of four takeaways for the Syracuse defense • It was Cisco’s seventh interception of the season, the most for any freshman in the FBS, and tied him with BC’s Hamp Cheevers for the national lead • Cisco now has 16 passes defended in 2018, the highest total ever for a Syracuse true freshman.

Lawrence earned his fifth ACC Rookie of the Week honor after he completed 27-of-36 passes for a career-high 393 yards with one touchdown in Saturday night’s 56-35 win over South Carolina • Recorded the most passing yards by any Clemson player in its 116-game all-time series against the Gamecocks • Become the first player in school history to engineer three touchdown drives of 95 yards or more in a single game.