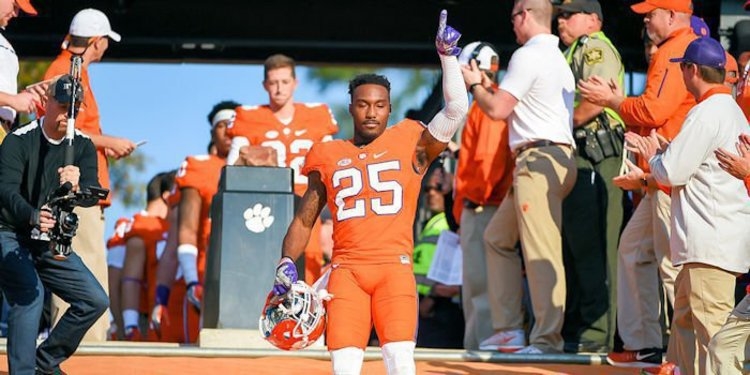 The latest Pro Football Focus Top 12 prospects on Wednesday included three Clemson players with defensive back Cordrea Tankersley, Mike Williams, and Deshaun Watson. Tankersley was rated as the top defensive back on the draft board at #4 overall.

"At 6-foot-1, Tankersley’s size stands out immediately, and he has the movement and ball skills to intrigue NFL scouts," PFF said. "He had the No. 6 overall grade among the nation’s cornerbacks, allowing only 46.9 percent of his targets to be completed while intercepting four passes and breaking up nine. In two-plus years, Tankersley’s allowed an NFL passer rating of 40.0 on passes into his coverage, and he should be coveted by many different styles of defensive coordinator."

Tankersley finished the National Championship game with five tackles and a pass deflection.

Williams was rated as the top wide receiver on the draft board at #5 overall.

"Putting on a show down the stretch is never bad for draft stock, and that’s just what Mike Williams did in the College Football Playoff," PFF said. "The 6-foot-4 receiver has the big body to win in the short game as a possession receiver but also the body control and ball skills to win in contested situations downfield. That versatility has moved him to the No. 1 spot among receivers as he can succeed with different styles of quarterback and in various schemes, though a signal-caller who is willing to let him make plays down the field will help Williams to maximize his potential."

Williams finished the National Championship game with eight catches for 94 yards and a touchdown.

Watson was rated as the top quarterback on the draft board at #12 overall.

"One of the most fascinating prospects during the draft process, Watson is extremely talented, though his season felt underwhelming due to the incredibly high expectations put on him as a potential No. 1 overall pick," PFF said. "His accuracy and decision-making were inconsistent throughout the season, but Watson has a knack for bouncing back from mistakes and making big plays when it counts, something he’s done throughout his career and culminating with an incredible fourth-quarter comeback in the CFP title game against Alabama. He could stand to improve his instincts in the pocket, and read through his progressions more efficiently, but he throws with great touch and he has the zip to put the ball into tight windows up the seam. Watson is likely a starting NFL quarterback, but the question remains just how good can he be, and the NFL will ultimately determine where he lands on draft night."

Watson finished the comeback victory over Alabama going 36-for-56 for 420 yards and three passing touchdowns. He also had 21 rushes for 43 yards and rushing score.

DeAndre Hopkins says he is the best receiver in the NFL
Post your comments! Cid14 ClemTig® HumbleServant® BigAl31® SOLOS®