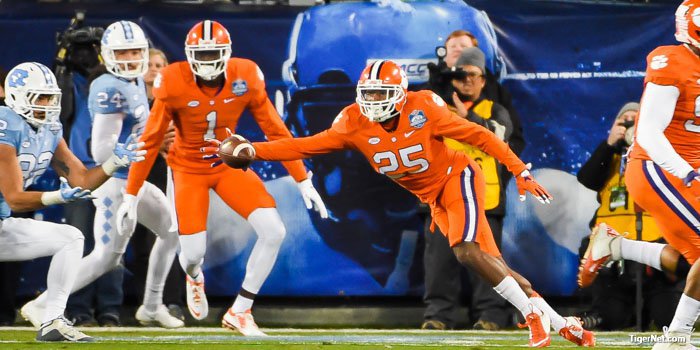 Tankersley breaks up a pass in the ACC Championship.

Clemson junior defensive back Cordrea Tankersley will return for his senior season instead of declaring early for the NFL. Monday at 5 pm EST is the deadline for underclassman to declare for the 2016 NFL draft.

Cordrea's father George Tankersley told TigerNet Monday morning that the decision for his son to return for his senior season was a family decision.

"Me, my wife and also Cordrea made the decision for him to come back,” George told TigerNet. "We want him to get his degree and he could possibly have a better draft pick next year."

He had 48 tackles, 3.5 tackles for loss, five interceptions (20th in the nation) including one for a touchdown and was the seventh-leading tackler on the team. He was also voted third-team All-ACC by the ACC coaches.

NFLdraftscout.com had Tankersley rated as the #8 cornerback while CBS Sports compared him to former Clemson defensive back Byron Maxwell.

According to CBS Sports Draft Preview: "Tankersley is similar in size and play to the former Clemson star. He's not quite as big weight wise as Maxwell, but may be a tad faster."

Tankersley will provide leadership for next year's team as he is the only returning starter in the secondary after the early departures of CB Mackensie Alexander, SS Jayron Kearse and FS T.J. Green.