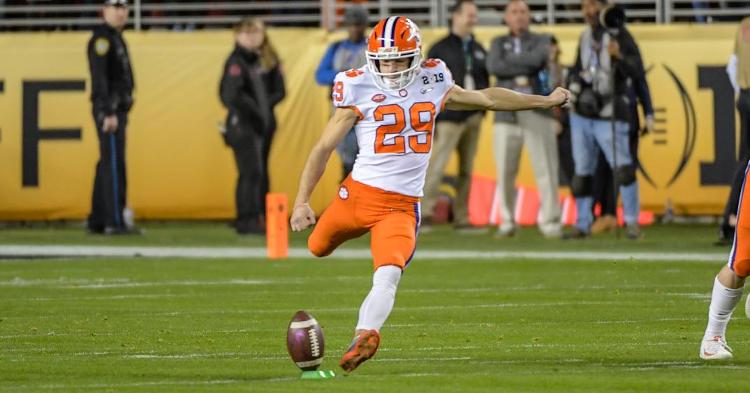 Clemson head coach Dabo Swinney was seen aggravated as he gave some tough love to his kicker B.T. Potter after a 24-yard field miss during Saturday's 45-14 win over Florida State.

Swinney was asked during his Tuesday press conference how did Potter respond to the adversity in practice.

"He did a good job. He’s going to be a long field goal guy and kickoff guy," he said. "He’s done an awesome job but got to give somebody else a chance on the short field goals. Because we got to have that and he’s 55 percent, and he’s way better than that. So he’s got to get the type of focus that he needs, and so yeah came back and he got out there last night and did a good job, but we got a long way to go and, you know, I haven’t lost any confidence in him."

Swinney believes that Potter is the most talented kicker that has come through Clemson in a long time.

"He’s going to kick in NFL," he said. "He’s probably the most talented kicker I’ve ever had, just on pure talent and just pure leg strength and all that stuff. He’s just got to grow up a little bit, and get the type of mental toughness that it takes to be special at that position and the type of focus. And so he will, he’s a young guy. He’s got a long, long career in front of him. But if he wants to be the guy, he’s going to have to earn it."

For the season, Potter is 5-for-9 in field goals with a long of 51 and has made all 27 of his extra points along with 42 touchback kicks.