Greensboro, Ga. (April 13, 2016) – Head Football Coach Dabo Swinney and former Clemson and NFL quarterback Steve Fuller will represent Clemson in the ninth annual Chick-fil-A Peach Bowl Challenge charity golf tournament. The duo will compete for a share of a $540,000 total purse, and the team’s winnings will be split between the KATBO Foundation and an endowed scholarship at Clemson University.

The Chick-fil-A Peach Bowl Challenge features pairings that include a university head coach and a celebrity or former athlete from the same school competing in a scramble format against other university teams from around the country. In the past nine years, the event has provided $5.3 million in scholarship and charitable contributions.

This year’s edition, set for May 1-3 at the Reynolds Lake Oconee resort outside Atlanta, is scheduled to feature 14 teams and top national coaches such as Swinney, Urban Meyer, Nick Saban, and many more. In special recognition of their coaching legacies, newly retired coaches Frank Beamer (Virginia Tech) and Steve Spurrier (South Carolina) will represent their former teams for the final time in this year’s event.

The field of competitors is scheduled to include three former winning teams including Paul Johnson and Jon Barry of Georgia Tech (2011, 2012, 2014, 2015), Steve Spurrier and Sterling Sharpe from South Carolina (2008, 2009), and Frank Beamer and Dell Curry of Virginia Tech (2007). Five of the participating coaches led their teams to New Year’s Six Bowl Games in the College Football Playoff last season, including Nick Saban and Dabo Swinney, who faced off for the National Championship. The lineup includes three Heisman Trophy winners, four Dodd Trophy winners, and two new teams from the University of Georgia and University of Houston.

Teams will be vying for the $100,000 first-place prize, with each team receiving a portion of the $540,000 purse. All charity payouts will be split equally between an endowed scholarship at each university and a charity of the coach’s choice.

The field of competitors for the featured event is projected to include: 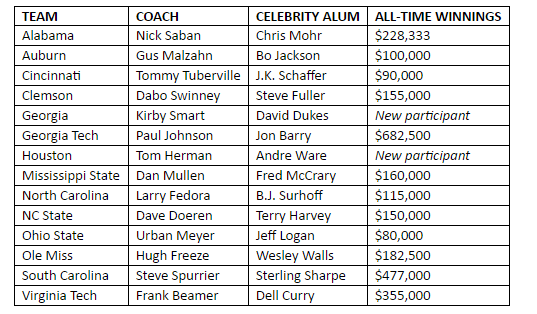 The tournament will be broadcast on ESPNU in August and December. Specific dates will be announced this summer.