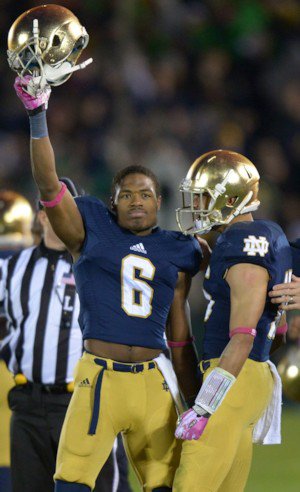 Notre Dame senior cornerback KeiVarae Russell talked to the media following Notre Dame's 62-27 smackdown of UMass on Saturday and had some honest comments about sophomore quarterback Deshaun Watson, Clemson's overall team speed on offense and the injury to Mike Williams.

"I watched the Louisville game," Russell said. "I saw some weaknesses in that game for sure. I seen some strengths as well. They are a good team. I think Deshaun Watson

Deshaun Watson
So. Quarterback
#4 6-2, 207
Gainesville, GA
View Full Profile manages the game well. I’ve played against quarterbacks better than him, I’ve played against quarterbacks that weren’t as good as him…He’s not overly superior, I don’t think he’s like a top five quarterback in the country, I think he manages the game extremely well, and does what the offense asks of him. He doesn’t do too much, but he does enough for him."

Russell thinks that facing the Clemson offense will be similar to the talent level or worse that he faces daily at practice.

"For me personally, I'm not speaking for the entire defense - I've played against players as good as their players or even better," Russell said. "So there is no worry for me at all. I've seen what our defense can do when we put our mind to it. I think we just got to do it for four quarters instead of 3 or a half or 2 quarters. We just got to come out and be fast from the get go because they are going to be the best team we have played up till this point and vice versa we are going to be the best team they have played up till this point. It's going to be a fun one."

Russell was saddened to hear about Clemson wide receiver Mike Williams' neck injury, but he is not worried about the speed of the other Clemson skill players.

"Great group of guys," Russell said. "I'm sorry to hear Mike Williams is out for the year because with him in there they had like a top 5 group in the country I'd argue. Artavis Scott is still one of the top guys in the country. He is a great, great player. With Germone Hopper and the other guys they have, they have a lot of talent and skill guys. Like I said, I play against that every day. I play against Will Fuller, Chris Brown, Torii Hunter, Corey Robinson. I play against an offense that is similar if not better. For me, they have a great group but it doesn't worry me. Like I said, I am well prepared playing against guys like Will Fuller every day. So when I see an Artavis Scott, the speed is not going to be different. Will Fuller is one of the fastest guys in the country.

Russell was on the Bednarik and Nagurski Award Watch list for 2014 but missed the entire 2014 football season due to a school academic investigation.