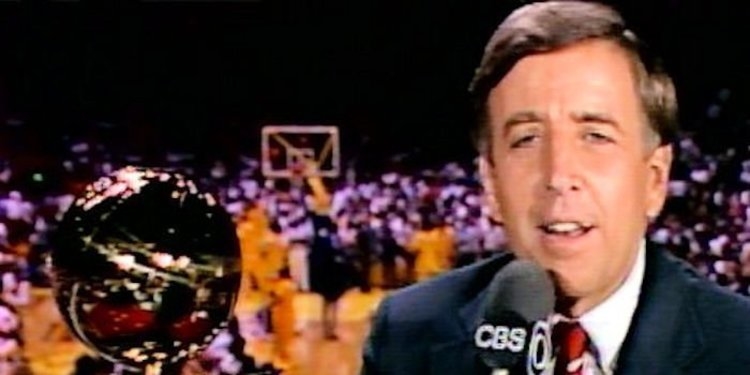 Musberger started back in the TV business in 1968

Brent Musburger, one of the most recognizable and accomplished voices in the history of television, has decided to end his legendary play-by-play career at month’s end. Musburger, who has worked in the industry for nearly 50 years as host and play-by-play commentator – including the last 27 with ABC/ESPN – will call two more men’s college basketball games, punctuated by his final telecast, Tuesday, Jan. 31 at 9 p.m. ET on ESPN (Georgia at Kentucky from Rupp Arena).

“What a wonderful journey I have traveled with CBS and the Disney company,” Musburger said. “A love of sports allows me to live a life of endless pleasure. And make no mistake, I will miss the arenas and stadiums dearly. Most of all, I will miss the folks I have met along the trail.

“But the next rodeo for me is in Las Vegas. Stop by and we'll share a cold one and some good stories. I may even buy!”

ESPN President John Skipper added, “Brent's presence and delivery have come to symbolize big time sports for multiple generations of fans. When he opens with his signature ‘You are looking live,’ you sit up straight in your chair because you know something important is about to happen. Brent's catalog of big events is unmatched, and he has skillfully guided us through some of the most dramatic and memorable moments in sports with his authentic and distinctive style. He is one of the best story-tellers to ever grace a sports booth. We and the fans will miss him.”

Among the long list of momentous events Musburger has called was the 1985 NCAA Men’s Basketball Championship when Villanova pulled off its historic upset over Georgetown. Fittingly, that game was played at Rupp Arena, site of Musburger’s final scheduled play-by-play telecast January 31, a game he will call with analyst Jay Bilas and reporter Kaylee Hartung. Musburger’s second-to-last game will be this Saturday, Jan. 25, at 2 p.m. when he calls Florida at Oklahoma with analyst Dick Vitale and reporter Hartung.

Musburger began his career in local television in 1968 and has been on the national stage since 1975. He joined ABC in May 1990 after 15 years as CBS Sports’ primary host and play-by-play commentator.

In his current role, he has primarily called college football and basketball, highlighted by SEC Network football since the network launched in 2014 and ESPN college basketball telecasts (mostly SEC action this season). He has also worked on select bowl games, including the 2016 Rose Bowl and the 2017 Sugar Bowl.

During his career at ABC and ESPN, he has hosted and/or called play-by-play for college football (including seven BCS Championship Games) and basketball, golf, NBA, NASCAR and IRL races and the 2006 FIFA World Cup. He called the Little League World Series from 2000-11. He also hosted Super Bowl XXV’s pre-game and half-time shows as well as the 1991 Pan Am Games from Cuba. He has also been part of ESPN Radio since 1992.

For CBS, he was host or play-by-play on NFL games and the ground-breaking The NFL Today, the NCAA Final Four, tennis’ US Open, the NBA, the Masters, the Belmont Stakes and the College World Series. He also did baseball play-by-play for CBS Radio.

Born in Portland, Ore., and raised in Montana, Musburger attended Northwestern University’s Medill School of Journalism before joining the Chicago American. His broadcast career began in 1968 as sports director at WBBM-TV in Chicago. He then moved to Los Angeles as sports anchor and later, co-anchor of the nightly news at KNXT-TV.

In November 2016, Musburger was presented with the Vin Scully Lifetime Achievement Award in Sports Broadcasting, presented by Fordham University's WFUV radio station. It is named for the legendary Dodgers broadcaster, a Fordham graduate.

Through The Years: Brent Musburger (via @GettyImages) pic.twitter.com/J105OoWzy7

When I think of a broadcaster who has been everywhere, it's Brent Musburger. Here poolside with Namath before Super Bowl III (black shirt) pic.twitter.com/sKuLpmdn6z