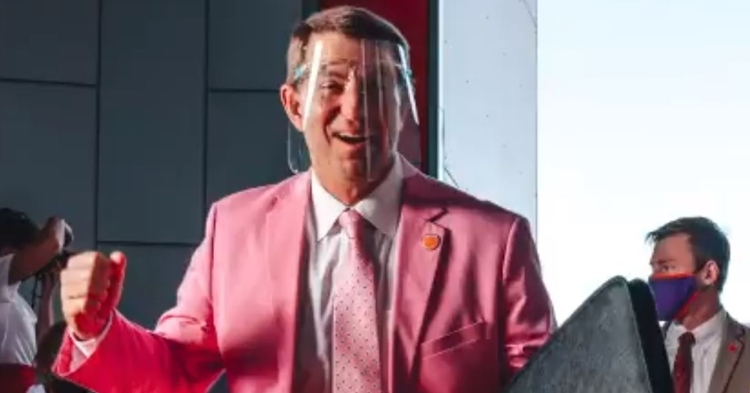 Clemson Football is currently resting up during their off-week as they try to finish strong in 2020.

The team's Twitter account posted a fun video of Clemson players talking about the fashion of head coach Dabo Swinney and a few of their teammates.

"Coach Swinney with the pink suit," receiver Amari Rodgers said. "He loves wearing this every single year. He always makes a big deal out of it."

Rodgers believes that Swinney can improve his overall gameday look by not wearing such baggy pants.

"It could be a little slimmer (pants). It's a little loose on him. I don't think he is hip on that yet. He's still in the past with the swagger and the 90s and stuff like that. We try to tell him everything now is a little bit tighter, but I don't think he has gotten the gist yet. He's gonna get there."

D.J. Uiagalelei agrees with Rodgers that he likes the pink suit, but the loose pants need to be addressed.

"I like the pink jacket for breast cancer awareness with the pink tie," Uiagalelei said. "Like it. He definitely needs to have his pants a lot tighter at the bottom. I think he should show a little bit of his ankles. I think that would be really cool. He has a classic fit. It's a great suit, all the suits that he has. It's not too bad."

Xavier Thomas confirms that the pants must be tighter.

"He always wears the breast awareness suit around this time," Thomas said. "We always like the pink jacket, which is really nice. We always joke around with the big pants that he wears."

Regardless of the look of Swinney's pants, you can tell that his players have a ton of affection for him and that's the real story here.