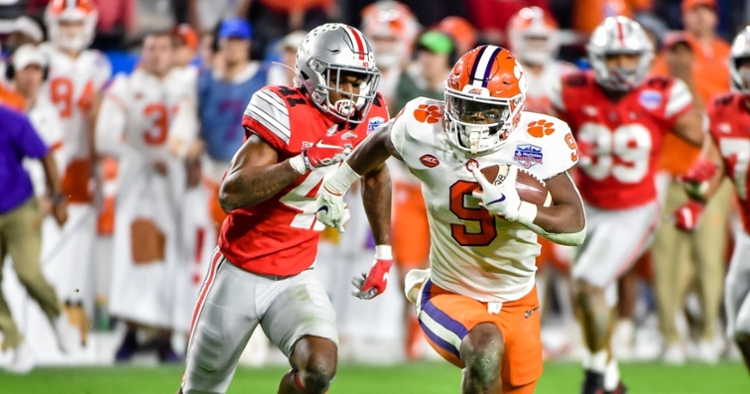 Another Power 5 conference begins play this weekend (SEC) and another announced a schedule over the weekend (Big Ten) -- so some of those early September and August Playoff projections are thrown out the window (and may just be again if the Pac-12 can get things going too).

Among the currently-scheduled teams to play, ESPN's Playoff Predictor agrees on a trio of teams most likely to make the College Football Playoff with Clemson (68 percent), Ohio State (68) and Alabama (65). The next-highest chances come with another Big Ten team in Wisconsin (39 percent) and then a Group of 5 team in UCF (32), after its thorough win at Georgia Tech. Other candidates in the 20 percent range are Georgia (24), Texas (22) and Penn State (20). Surprisingly, Oklahoma, a common CFP projection at the moment, is down at an eight percent chance.

The Playoff Predictor favors Ohio State to win it all (26 percent), followed by Alabama (23) and Clemson (21).

ESPN's postseason projections have Clemson in both the Rose Bowl (Mark Schlabach - Clemson-Oklahoma) and the Sugar (Kyle Bonagura - Clemson-Oklahoma), with each seeing the same final of Clemson and Alabama in Miami. Their projections plus a number of more ESPN panelists see the same four, outside of one pick for Texas in 13 predictions instead of the Sooners.

USA TODAY projects Ohio State versus Oklahoma in the Rose and Clemson-Alabama once again in the Sugar. The site picks Ohio State and Alabama for the national title game.