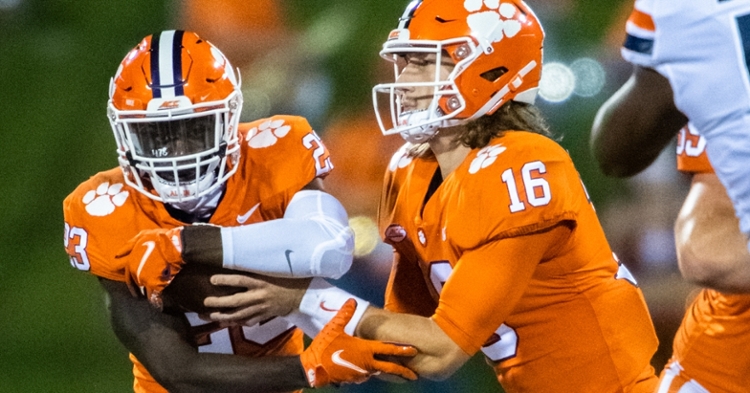 NEW ORLEANS (October 22, 2020) – Trevor Lawrence, a junior at Clemson, has been selected as the Manning Award Quarterback of the Week. He earns the honor over seven other Manning Award Stars of the Week in the Allstate Sugar Bowl’s Facebook contest.

Lawrence set career-highs in passing yards and touchdowns, while playing just one second-half series, completing 24-of-32 passes for 404 yards and five touchdowns as he led the Tigers to a 73-7 ACC win over Georgia Tech on the road.

The Cartersville, Georgia, native, was named the ACC Quarterback of the Week for the third time this season. He posted his first career 400-yard passing game, the 10th by a Clemson quarterback all-time. It represented the first game with at least five passing touchdowns by a Clemson quarterback since Deshaun Watson’s six-touchdown performance against South Carolina in 2016. In September, Lawrence was named to the 2020 Allstate AFCA Good Works team.

Clemson’s 52 points were its most in a first half against an ACC opponent, breaking its previous record of 49 against Wake Forest in 1981. They will return home on Saturday when they take on Syracuse at Death Valley. Kickoff is scheduled for 11 a.m. CT on ACC Network.

Lawrence won this week’s award over Virginia Tech’s Hendon Hooker and Grayson McCall of Coastal Carolina. Hooker completed 11-of-15 passes for 111 yards and one touchdown while also rushing for a career-high 164 yards and three touchdowns as the Hokies rolled to a 40-14 ACC victory over Boston College. McCall completed 17-of-24 passes for 202 yards and two touchdowns, while also rushing for a touchdown, as he directed a final drive for the Chanticleers to set up a game-winning field goal with four seconds to go in a 30-27 Sun Belt road win over No. 21 Louisiana.

While the Manning Award selected 30 quarterbacks for its preseason Watch List, additional quarterbacks are expected to be added to the Watch List later in the season. Ten finalists will be selected and the winner is scheduled to be announced following the College Football Playoff National Championship.

In its first 16 years, the Manning Award has recognized the top names in college football. It has honored quarterbacks from 12 different schools and from four different conferences. The Big 12 Conference (Kyler Murray, Baker Mayfield, Vince Young, Colt McCoy and Robert Griffin III) and the Southeastern Conference (Joe Burrow, Johnny Manziel, Cam Newton, JaMarcus Russell and Tim Tebow) lead the way with five Manning Award honorees each, while and the Atlantic Coast Conference (Deshaun Watson twice, Matt Ryan and Jameis Winston) has had four Manning Award winners. LSU (Burrow and Russell) joins Oklahoma (Murray and Mayfield) and Texas (McCoy and Young) as the only schools with two different winners.

All the Manning Award winners follow in the footsteps of the Mannings themselves. In college, Archie, Peyton and Eli Manning combined for over 25,000 passing yards and 201 touchdowns while playing in 10 bowl games and earning four bowl MVP awards. Archie was the No. 2 pick in the NFL Draft, while both Peyton and Eli were selected No. 1 overall.