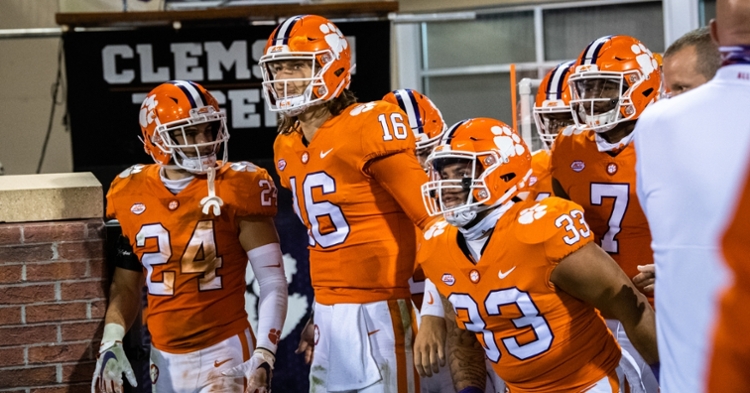 Lawrence is leading the nation despite Heisman hype trending down. (ACC photo)

Pro Football Focus ranked the nation's QB situations through 11 weeks of action and Clemson and its QB1 Trevor Lawrence tops the list.

The PFF ranking isn't based on pro potential and instead the variety of their advanced metrics judging their play so far.

"After earning PFF grades above 90.0 as a true freshman and sophomore — something only he has done in the PFF College era — Lawrence is on pace to post another elite grade for his third and likely final season at Clemson," PFF's Anthony Treash writes. "In six starts, Lawrence has a 91.3 PFF grade and has been one of college football’s best downfield passers week in and week out. He has thrown over 66% of his passes more than 10 yards downfield accurately — the second-best mark in the country behind only Justin Fields and over 11 percentage points higher than third."

The best QB left on Clemson's schedule is Virginia Tech's Hendon Hooker, at No. 21.

"Hooker has proven to be one of the most dangerous running quarterbacks in the country this year," said PFF. "He ranks first among Power 5 quarterbacks in: rushing grade at 83.2, 15-plus yard rushes with 12, total broken tackles with 26 and yards per attempt on designed runs at 7.3. As a passer, Hooker has been reliant on play-action to help get that facet cooking."