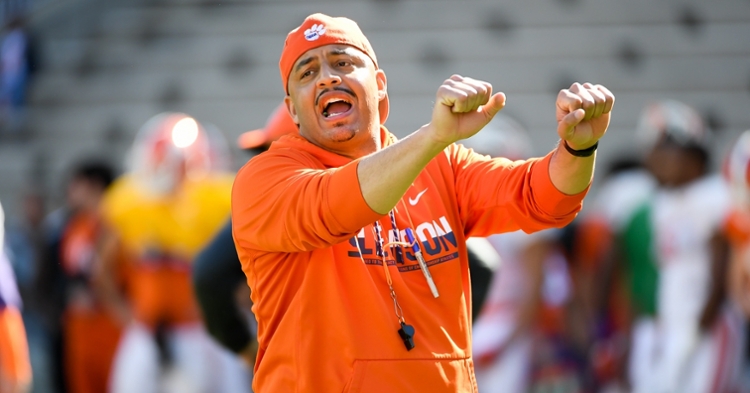 Elliott says he gets frustrated this time of year when reports mention his name.

Tony Elliott is no stranger to the coaching rumors carousel and the Broyles Award winner has already had his name mentioned in relation to the opening at rival South Carolina.

The Clemson grad, as he has at this point in time in recent years, says his sole focus is on the Tigers.

"This is the time of year where I get frustrated just because my name is thrown out there and you guys know, hopefully my track record speaks for itself," Elliott said when asked about the opening on a media Zoom call Monday, "and that I’m focused on these players and the staff right here. They’ve been too good for me to even consider any other jobs at this time.

"So right now, I’m focusing on Clemson and being the best that I can be. As we started this conversation we’ve got some things we’ve got to clean up offensively. That’s my focus right now."

When asked about the South Carolina job, Elliott first offered his thoughts on what their program is going through now internally.

"First and foremost, you feel for Coach (Will) Muschamp and you feel for all those coaches," he said. "I’ve said it before it’s a coaching fraternity. I went through it when I was at Furman where we got fired and there is so much uncertainty and unknown. You start to question yourself. That’s not a good situation for anybody and think about the players.

"The players went there to play for him. They’re invested, they’re invested in him and they are invested in the program. And, you know, it’s been it’s been a crazy year. So I don’t know all the details surrounding that. But definitely my heart goes out to the coaches and the players because, again, this wasn’t what they were working towards. They were working towards a different outcome."