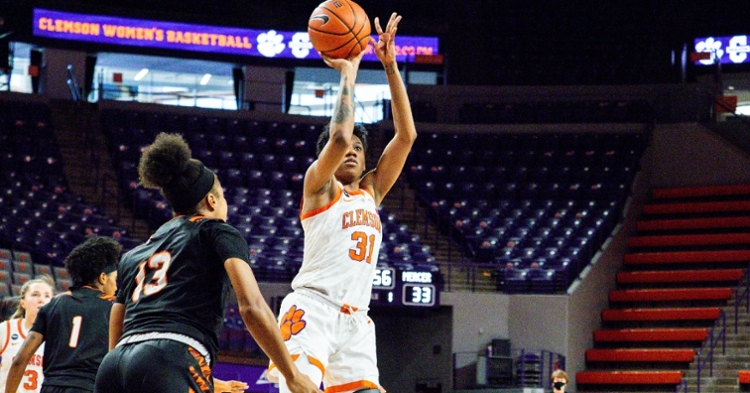 CLEMSON, S.C. — Forcing 20 turnovers and limiting its opponent to a modest 54 points, Clemson showed out defensively on Wednesday and pulled away down the stretch at Littlejohn Coliseum. The Tigers defeated the Bears 67-54 after outscoring Mercer 38-28 in the second half, and Shania Meertens led the way with an outstanding performance off the bench.

Knocking down six 3-pointers, Clemson (4-0) went 6-for-15 from behind the arc and 22-for-58 on field goals attempts overall. The Tigers also shot 17-for-27 at the free throw line and pulled down 50 rebounds, 17 more than the 33 rebounds tallied by Mercer (1-2). Making the most of their defensive intensity, Clemson scored 23 points off turnovers. Additionally, the Tigers amassed 28 points in the paint, 18 fast break points and 14 second-chance points. While Mercer's bench was held scoreless, Clemson's bench racked up 26 points.

Meertens was Clemson's leading scorer on the afternoon, going 6-of-12 from the floor and 5-of-7 at the charity stripe en route to finishing with 17 points. Delicia Washington scored 16 points on 7-of-15 shooting to go along with her six rebounds. Kendall Spray, the NCAA's active leader in career 3-pointers, connected on four 3-point attempts and corralled seven boards. Also of note, Tylar Bennett led all players with 10 rebounds. Mercer's Jada Lewis scored a game-high 23 points.

Destiny Thomas scored the first points of the day for the Tigers via three-ball. Not long after that, Washington quickly fired up a 3-pointer immediately after receiving a pass from Weronika Hipp on the fast break. The successful 3-point try put Clemson up 8-5, and the Tigers went on to lead 12-10 at the end of the first quarter. Washington came through with an impactful steal midway through the second quarter, intercepting an inbound pass and passing ahead to Spray, who then sank a step-back trey that increased Clemson's lead to seven points.

At halftime, the Tigers boasted a 29-26 advantage. Spray broke a tie in the closing seconds of the first half by draining a deep three from the edge of the half-court logo. Tylar Bennett forced the turnover that led to the 3-pointer by swatting a pass out of the air. Clemson outscored Mercer 20-15 in the third quarter, leading by as many as 11 points during the period. Meertens braced the Tigers late in the period, producing a 3-point play via a drive to the hoop and an ensuing free throw. Meertens proceeded to make a layup for the first basket of the fourth quarter, and Clemson controlled the game the rest of the way, winning 67-54.

Clemson Head Coach Amanda Butler came out on top against Mercer Head Coach Susie Gardner, a friend of Butler's and a fellow native of Mt. Juliet, Tenn. Clemson will be back at it on Sunday, Dec. 6, for a matchup at Littlejohn against the College of Charleston Cougars (1-1). The opening tip is set for 2 p.m., and the contest is scheduled to air on ACC Network Extra.

"I'm really proud of our team. I was very concerned about this game because Mercer's a really good team with outstanding guards. This was also the end of a really, really hard stretch for us. We haven't had a day off in several days, and the games have gotten tougher as we've gone along. Our seniors really stepped up for us. Shania Meertens came to play. She played a really clean game today, and I'm very proud of her."

"I'm really please with our scoring balance. We had pretty good rebounding balance, as well. Tylar [Bennett] had 10 [rebounds]; Amari [Robinson] and Kendall [Spray] had seven [rebounds]; and Delicia [Washington] and Gabby [Elliott] had six [rebounds]. That's tough to do against a really good team."