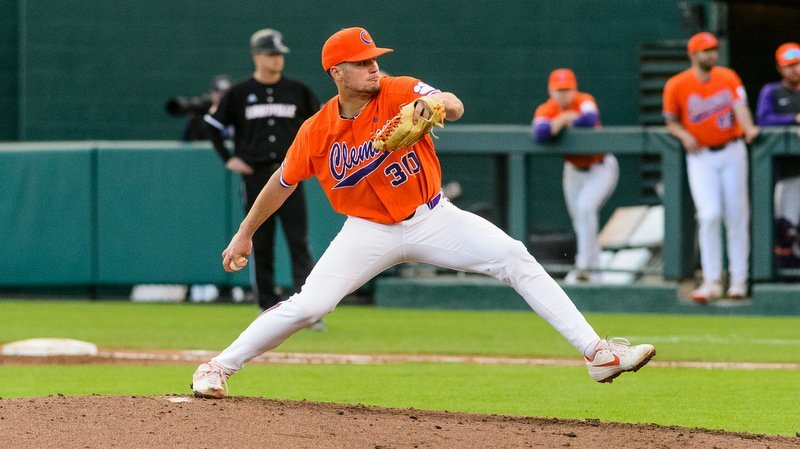 TALLAHASSEE, FLA. - Drew Parrish allowed just three hits with 12 strikeouts in 8.0 scoreless innings pitched to lead Florida State to a 6-2 victory over No. 13 Clemson at Dick Howser Stadium on Friday night. The Seminoles, who took a 1-0 lead in the series, improved to 20-13 overall and 8-8 in the ACC. The Tigers fell to 25-9 overall and 11-5 in ACC play.

Parrish (4-3) earned the win by allowing just one walk in throwing 110 pitches (78 strikes). He also retired 18 batters in a row from the first inning to the seventh inning. J.C. Flowers recorded the last out to register his seventh save of the year. Tiger starter Davis Sharpe (5-2) suffered the loss, as he yielded four hits, four runs and three walks with four strikeouts in 6.0 innings pitched.

In the third inning, Alec Sanchez lofted a sacrifice fly, then Drew Mendoza crushed an opposite-field, three-run homer, the only hit of the frame, with two outs. The Seminoles added two runs in the seventh inning without a hit. Five of the Seminoles' six runs were scored by players who walked or were hit-by-pitch. Logan Davidson led off the ninth inning with a home run, his 10th of the season. Bo Majkowski added a run-scoring single with two outs in the frame.

The series continues Saturday at 2 p.m. on ACC Network Extra.

Clemson-FSU box
Get the latest Clemson gear right here!
Comment on this story