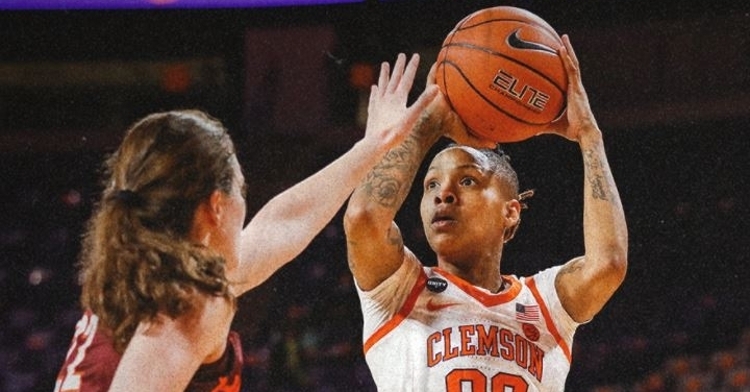 Clemson with the narrow loss against Virginia Tech (Photo: via Clemson Wbball Twitter)

CLEMSON, S.C. — Taking on Virginia Tech at Littlejohn Coliseum, Clemson fell short on Thursday. In the fourth quarter, the Tigers were able to pull within one point of the Hokies after trailing by double digits earlier in the second half, but Virginia Tech ultimately won 70-64.

Serving as Clemson's leading scorer, Delicia Washington poured in 17 points to go along with her four assists and four rebounds. Amari Robinson shot 6-for-12 from the floor and scored 14 points. She also pulled down five boards. Nique Cherry provided the Tigers with a spark off the bench by scoring 13 points for her best scoring output in a Clemson uniform. She was a perfect 5-for-5 on field goal attempts and corralled a team-high seven rebounds, as well. Virginia Tech's Aisha Sheppard and Elizabeth Kitley dropped 27 and 24, respectively.

Virginia Tech raced out to an early 11-2 lead, but Clemson chipped away at its deficit over the course of the first quarter. A 3-point play recorded by Washington late in the period pulled the Tigers to within three. However, the Hokies held a 21-14 advantage at the conclusion of the first quarter. Washington continued to lead the way for the Tigers on offense in the second quarter, which ended with Virginia Tech up 35-25.

With 6 1/2 minutes remaining in the third quarter, the Hokies boasted a commanding 46-29 lead. The Tigers battled back, though, with an 11-0 run that cut Virginia Tech's lead to six. The Hokies entered the fourth quarter ahead 48-42. Not long after Kendall Spray sank a three-ball, Amari Robinson netted a jumper that moved Clemson just one point behind Virginia Tech. A Destiny Thomas trey at the 6:17 mark made the score 53-50 in favor of the Hokies, but the Tigers were never able to fully erase their deficit, falling 70-64 in the end.

The Tigers will close out the regular season on Sunday, Feb. 28, when Clemson is set to host Miami (9-10, 6-10) at Littlejohn. The Hurricanes defeated the Tigers at home earlier in the season. Sunday's contest will tip off at 2 p.m. and air on a regional sports network (RSN).

"I loved our fight. I loved the ways in which we showed our toughness. A lot of teams want to believe they are tough, but it's another thing to put your toughness on display. We just had too many breakdowns. [Aisha] Sheppard and [Elizabeth] Kitley are two of the best offensive players in our league, and they played like it tonight."

"I'm really proud of Cherry. The year has been filled with ups and downs for her, but for her to deliver her best basketball on a night like tonight makes us really hopeful because we still have ball to play."