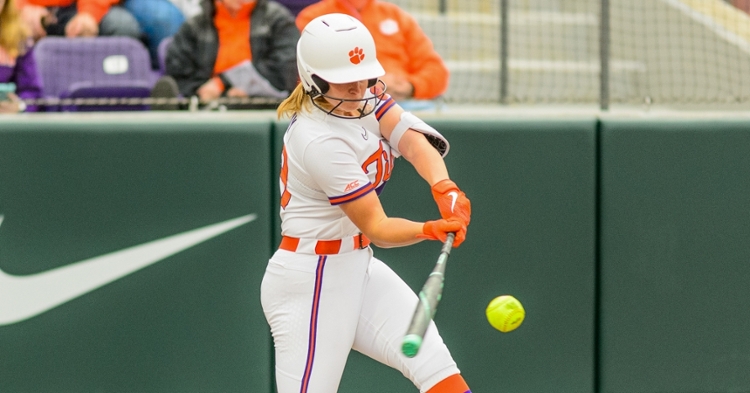 MK Bonamy hit her third home run of the season to put Clemson on top.

CLEMSON, S.C. – The Clemson Softball team continued its roll, winning its tenth straight game with a 7-2 victory over Pittsburgh on Saturday at Clemson Softball Stadium. The Tigers used a pair of home runs in the fourth to take their first lead and added four more runs in the fourth in the win. Clemson clinched its second ACC series in as many tries after sweeping Virginia last week.

Clemson is 18-7 overall and 5-0 in conference play, while Pitt falls to 6-11 and 1-4 in league. The Tigers have won 13 in a row at home in the inaugural season of the program, and are 16-0 on the season when scoring five or more runs in a game.

All three Clemson pitchers saw action, with Emma Whitfield earning the win and Valerie Cagle earning the program’s first-ever save. Whitfield and Cagle combined to throw the final 4.1 innings, surrendering just three hits and no runs.

Clemson trailed 2-0 in the fourth when Marissa Guimbarda blasted her 11th home run of the season to center, which cut the Pitt lead in half. Two batters later, graduate MK Bonamy crushed a pitch to left center to give the Tigers the lead for good.

Guimbarda (2-for-3), Bonamy (2-for-3) and freshman JoJo Hyatt (2-for-3) each tallied two hits, and together accounted for six of the seven runs driven in.

The series continues at Clemson Softball Stadium on Sunday. First pitch for game three is slated for noon, and is scheduled to stream on ACCNX. To purchase tickets, visit ClemsonTigers.com.

Don't call it a comeback ?? pic.twitter.com/mwQwQxSoRs