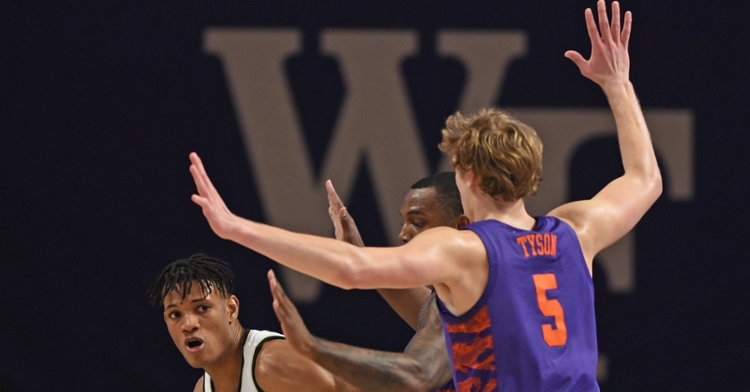 Alex Hemenway scored a career-high 17 points and Clemson led from almost the start in routing Wake Forest 60-39 at Joel Coliseum Wednesday afternoon in Winston-Salem. It was the Tigers’ first game in 12 days after a pause from activities due to COVID-19.

Aamir Simms added 13 for Clemson, which improves to 14-5 overall and 8-5 in the ACC, while Wake Forest falls to 6-12 overall and 3-12 in league play. The game marks only the fourth time in the last 10 years Wake Forest was held under 40 points.

"I'm really proud of our guys for sustaining the lead," said Clemson head coach Brad Brownell. "It's hard to maintain that sense of urgency when you have a big lead, but our guys played with great urgency throughout. We showed really great attention to detail on defense and took out Wake Forest's first line of offense."

The Demon Deacons jumped out to a quick 3-0 lead just 23 seconds into the game, but the Tigers ran off the next seven points over the next six minutes as Wake struggled from the field. The Tigers then began to build a workable margin and led 22-15 after Hunter Tyson made two free throws with just over three minutes remaining in the half.

The Tigers then scored the final seven points of the half – the Demon Deacons scored their last points at the 3:45 mark – and led 29-15 at intermission.

The onslaught continued into the second half, even though the Deacons once again started with a quick 3-pointer that made it 29-18. The Tigers then began to pull away and when Alex Hemenway drained a 3-pointer at the 6:52 mark, Clemson led 51-32. Hemenway and Tyson each made layups and the Tigers had the biggest lead of the game to that point at 55-32.

The Tigers were able to cruise the rest of the way for the victory.

With the win, this marks the first time since 1990 and just the third time since 1967 that Clemson has won its first four games in the month of February.

The 39 points allowed marked the second best scoring defense in an ACC road game in Clemson history. The Tigers allowed just 37 to Georgia Tech on Feb. 21, 2012.

The Tigers host Miami Saturday at 2 pm in Littlejohn Coliseum.

"I'm really proud of our guys for sustaining the lead. It's hard to maintain that sense of urgency when you have a big lead, but our guys played with great urgency throughout. We showed really great attention to detail on defense and took out Wake Forest's first line of offense."

"We were excited to play, so there was tremendous urgency from that standpoint. I think we were ready for what Wake Forest was trying to do offensively. We needed to guard well late in the shot clock, and we did just that."

"We've been wanting him to get a few more shots off. We've run a lot of things for him, and he's put in extra work. We gave Chase [Hunter] a start today and tried to sneak Alex in there to make shots off the bench, and he hit some big ones."

On the Tigers' other top performers:

"Aamir [Simms] and Hunter [Tyson] did a terrific job of defensive rebounding today. Wake Forest had only three offensive rebounds. Nick [Honor] was efficient, and that's what you're looking for in your point guard. Aamir played with poise, and he was extremely efficient around the basket. This was a really good performance by our guys."

Clemson vs Wake Forest Box Score
Comment on this story