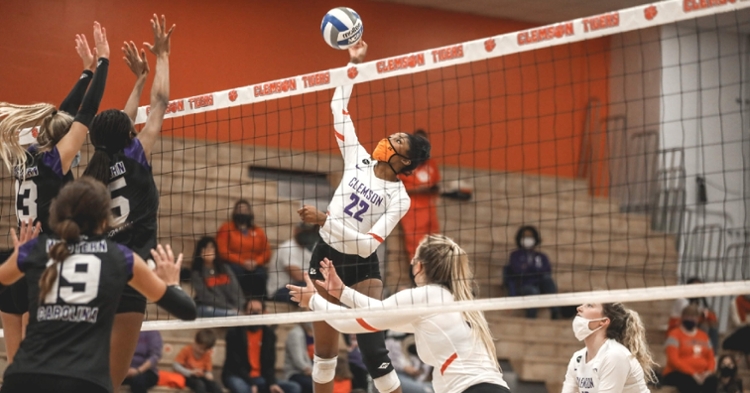 After a strong outing from middle blocker Ava Pritchard in the Tigers’ first match of the day, Pritchard followed that up with another solid performance. The Austin, Texas native totaled 14 kills, including five in the opening frame, and hit .407 for the match. Also at the middle blocker position for Clemson was Ani Clark, who posted nine kills on 16 swings along five block assists and one block solo.

Joining Thomas with a double-double was freshman outside hitter Cate Long, who tallied 10 kills and 16 digs. Junior outside hitter Crystal Childs tied her career high of nine kills and added eight digs. Sophomore setter dished out 47 assists on the night.

Clemson claimed five of the last seven points to take the first, 25-21. Sophomore libero, Caitlyn Meeks registered nine of her 17 digs in the opening frame. Meeks also dug 17 balls in the previous match.

Despite a 5-0 run by the Catamounts early in the second, Clemson held on to win in extras, 26-24. The score was tied 24-24, but a kill by Thomas followed by another Clemson kill by Pritchard gave the Tigers a 2-0 lead heading into intermission.

The Tigers dominated the second half of set No. 4. The score was tied 12-12,but Clemson outpaced the Catamounts, 13-5 to close out the match and earn its second victory of the day.

Clemson returns to Jervey Gym on Saturday, Jan. 30 for a doubleheader against Charlotte (0-0). The first match against the 49ers is scheduled for 1 p.m., while the second is slated for 6 p.m. Both matches are set to stream on ACCNX.

?? The dime to Ani Clark, who puts this one DOWN??

A back set to Solei rings up a POINT TIGERS ??