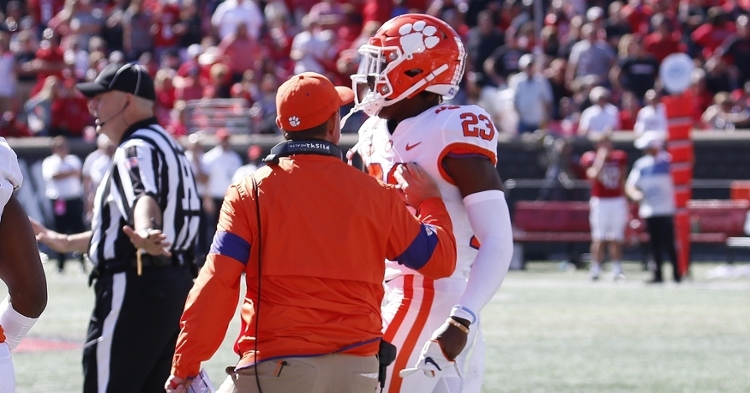 Clemson freshman defensive back Andrew Booth was ejected for throwing a punch during Clemson's 45-10 win over Louisville on Saturday.

Head coach Dabo Swinney said during his postgame press conference that he there will be consequences for the bad sportsmanship.

"Disappointed in Booth," Swinney said. "That is not who we are and that is not who he is. The one thing I can say about Andrew Booth is one of the best young people from an unbelievable family and if you would have asked me to list 1-100 who would be most likely do something like that, he would have been at the bottom of the list.

Swinney said they he apologized to Louisville for the bad conduct on the play.

"Really disappointed there. There will be some consequences involved with that. Apologized to coach Satterfield. That's not acceptable behavior at all. But (Booth) he will learn from it."

#Clemson coach Dabo Swinney apologizes to Louisville's Scott Satterfield after the game for Andrew Booth throwing a few punches after a punt play. Dabo tossed Booth before the refs ejected him. Dabo added that Booth would "ride the bus home." Video courtesy of WAVE. @wis10 pic.twitter.com/zhofsAHMHx