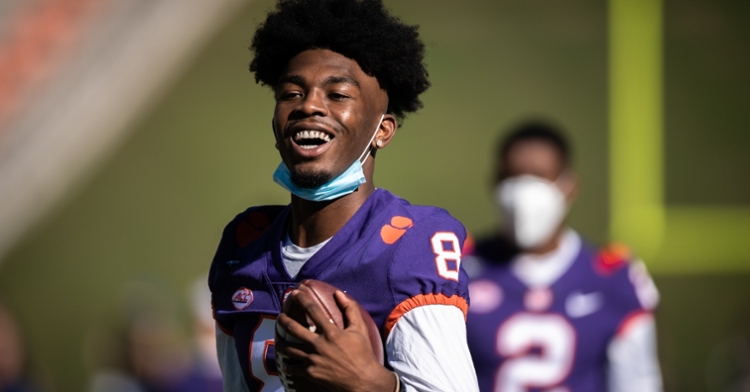 Justyn Ross will be limited and he has a big appointment coming up on his health status..

Clemson opened its spring practice session on Wednesday and a number of Tigers were ruled out by offseason procedures.

Clemson coach Dabo Swinney shared in a media Zoom call that defensive starters Lannden Zanders, KJ Henry and Baylon Spector are out for the entire spring due to surgeries, as well as reserve defensive lineman Etinosa Reuben. Reserve D-lineman DeMonte Capehart is expected to be out for the first half of spring practice.

On the offensive side, Matt Bockhorst and Davis Allen are expected to be limited.

Receiver Justyn Ross will practice on a limited basis as well but with no contact. He is set to have a "big appointment" per Swinney on his health status going forward in March. Ross had surgery last year after a fusion that was found in his neck and spine last spring and still has to be cleared for full contact.

Swinney also said that some players are missing the start of practice for COVID-19 protocol, whether by positive tests or contact tracing. Swinney did not identify the players affected, however.