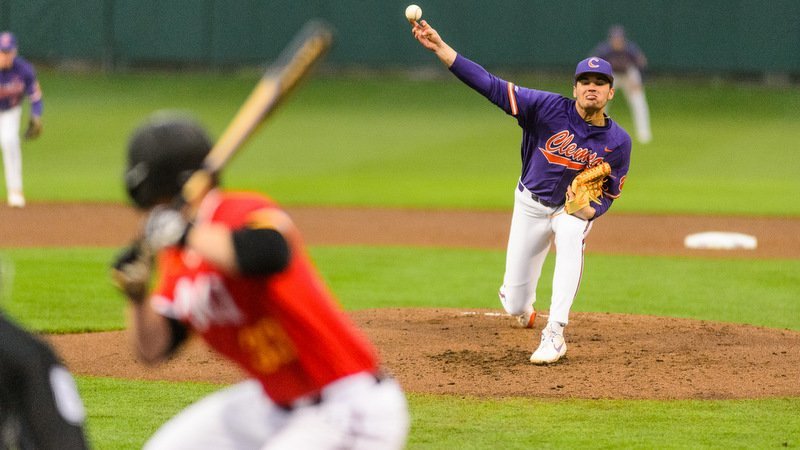 BRIGHTON, MASS. - Freshman righthander Davis Sharpe tossed 7.0 scoreless innings to lead No. 20 Clemson to an 8-1 victory over Boston College at Harrington Athletics Village on Friday. The Tigers, who took a 1-0 lead in the series, improved to 17-5 overall and 5-2 in the ACC. The Eagles dropped to 11-10 overall and 2-5 in ACC play.

Singles by Kyle Wilkie and Bryar Hawkins along with a run-scoring double by Bo Majkowski to start the second inning set up James Parker's two-out, two-run double. The Tigers stole a run in the fifth inning on a double steal by Sam Hall and Logan Davidson, who earlier extended his hitting streak to 10 games. Clemson added four runs in the eighth inning on run-scoring singles by Bryce Teodosio and Jordan Greene along with two bases-loaded walks.

The series continues Saturday at 2 p.m., on ACC Network Extra.

Freshman RHP Davis Sharpe has settled in nicely for @ClemsonBaseball. Working ahead & comfort locating to glove side; topped 91 early with consistent cut. Brought out CH in 4th, two in video below. pic.twitter.com/mmKA3BWi3F