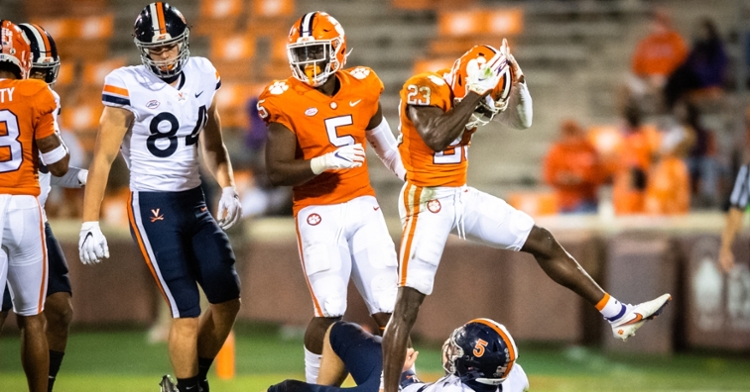 Quarterback Trevor Lawrence completed 25-of-38 passes for 329 yards with three touchdowns and no interceptions.

The game was Lawrence’s 16th of his career with three or more passing touchdowns, tying Deshaun Watson for the second-most such games in school history.

During the game, Lawrence (73) passed Jacory Harris (70) for sole possession of sixth on the ACC's all-time career passing touchdowns leaderboard.

Including his 329 passing yards in the game, Lawrence (7,793) became only the fourth quarterback in Clemson history with 7,500 career passing yards.

Lawrence became the first quarterback to complete 25 passes in a game against Virginia since Duke’s Daniel Jones completed 33 on Oct. 1, 2016.

Etienne’s receiving performance broke C.J. Spiller’s Clemson running back record of 108 receiving yards, set against Duke in 2008. Etienne recorded the fourth 100-yard receiving game by a running back in Clemson history, as all three previous instances were recorded by Spiller.

Etienne scored his second rushing touchdown of the season, the 58th of his career, on a 16-yard first-quarter run.

By scoring a touchdown in the 38th different game in his career on that run, Etienne tied the FBS record for most career games with a touchdown (by any means), held jointly by Florida's Tim Tebow (38 games from 2006-09) and Louisiana Tech's Kenneth Dixon (38 from 2012-15).

During the game, Etienne (390) passed placekicker Greg Huegel (379 from 2015-18) for second on Clemson's career scoring leaderboard.

Etienne surpassed his single-game career high in receiving yardage of 98, set in the 2019 Fiesta Bowl against Ohio State.

Etienne recorded his first receiving touchdown of the season — the seventh of his career — on a four-yard pass from Lawrence in the third quarter.

The receiving touchdown was the 65th total touchdown of Etienne’s career, moving him into a tie with Oklahoma’s DeMarco Murray for the 13th-most in the FBS since 1956.

The game was the third multi-touchdown game of Rodgers’ career, joining two-touchdown receiving performances at Florida State in 2018 and at Syracuse in 2019.

Rodgers has now recorded a touchdown reception in consecutive games for the third time in his career (vs. Florida State and Louisville in 2018; vs. Boston College and Wofford in 2019).

Running back Chez Mellusi scored his fourth career rushing touchdown on a two-yard fourth-quarter run. It was his first touchdown since scoring against Virginia in the 2019 ACC Championship Game.

The interception was the fourth of Turner’s career but his first in regular season play. Turner previously had an interception in the 2018 Cotton Bowl vs. Notre Dame, 2019 ACC Championship Game vs. Virginia and the 2019 Fiesta Bowl vs. Ohio State.

Defensive lineman Bryan Bresee recorded the first full sack of his career in the second quarter. He had previously split a sack in the team’s season opener at Wake Forest.

With his fourth PAT of the game, Potter passed Obed Ariri (99 from 1977-80) for fifth on Clemson's leaderboard for career PATs and became the fifth player in school history to convert 100 career PATs.

Potter extended his school record for consecutive PATs made to 101.

Running back Lyn-J Dixon returned the opening kickoff a career-long 52 yards on his first kickoff return of the season.

Clemson did not turn the ball over and produced an 11th consecutive game without turning the ball over multiple times. Clemson's 11-game streak with one giveaway or fewer is the program's longest in Head Coach Dabo Swinney's tenure.

Clemson recorded three sacks and has now recorded multiple sacks in 25 of its last 26 games, including each of its last nine.

Clemson played its 17th game all-time while ranked No. 1 in the AP poll, tying Pitt and Tennessee for 15th-most since the poll's inception in 1936. It was Dabo Swinney's 16th game coached at No. 1, moving him into sole possession of 20th among coaches in the AP Poll era (since 1936) and pulling him within one game of Ara Parseghian (17) for 19th.

The game was Clemson’s first of four scheduled home games in the month of October. If played as scheduled, it would represent the seventh time Clemson has played four home games in a single month, joining the 1920, 1987, 1989, 1993, 2008 and 2011 campaigns. In all six of the previous instances, Clemson posted a winning record in those contests.

Punter Will Spiers made his 47th career start to break Cole Chason's school record for career starts by a punter (46 from 2003-06).

Though 2020 is technically a divisionless season, Clemson improved to 29-8 against opponents historically from the ACC Coastal Division, including postseason play, under Head Coach Dabo Swinney. Clemson has now won 15 of its last 16 games against traditional Coastal Division opponents since 2015. Clemson has won its last 11 such games, dating back to the 2016 ACC Championship Game.

Clemson won its 24th consecutive game against an ACC opponent, including postseason play. The 24-game winning streak against conference opponents ties the 1998-2001 Florida State Seminoles for the third-longest streak in conference history.

Clemson won its 24th consecutive home game to extend its school record for the longest home winning streak in school history. Of the 119 players on Clemson's 2020 roster, 110 have never experienced a home loss in their Clemson careers. Nine fifth-year seniors on Clemson's 2020 roster were on the 2016 team that recovered from a home loss to Pitt by winning the national championship that season.

Clemson improved to 15-2 all-time when ranked No. 1 by the Associated Press. Clemson has never lost a regular season game as the nation’s top-ranked team.

Head Coach Dabo Swinney secured his 133rd career win as a head coach, pulling him within one victory of Virginia's George Welsh (134) for the second-most career wins by an ACC head coach. At the time of his retirement following the 2000 season, Welsh was the winningest head coach in ACC history prior to being passed by Bobby Bowden.

Clemson has now won 45 of its last 47 games against ACC teams.

Clemson improved to 103-2 since 2011 when leading after three quarters.

Clemson has now won 81 of its last 83 games when leading at halftime.

Clemson has now won 76 of its last 78 games against unranked teams.