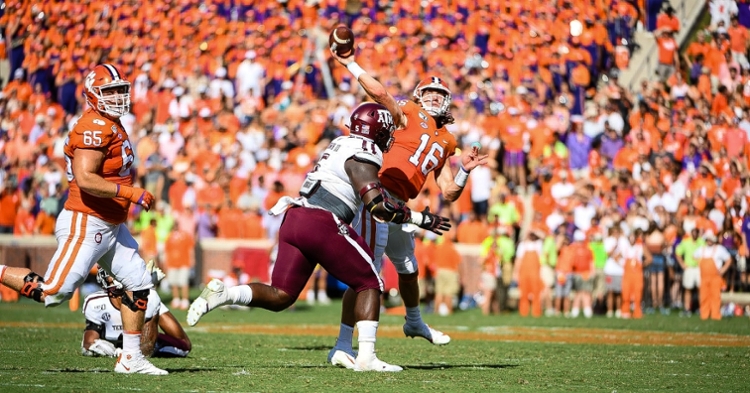 One year after Clemson’s top-ranked scoring defense allowed 501 yards at Texas A&M, Clemson held Texas A&M to 289 total yards on Saturday. It included holding quarterback Kellen Mond to 236 passing yards (97 through three quarters) after Mond accounted for 430 yards in the teams’ meeting in 2018.

Clemson held Texas A&M to 2.0 yards per carry on 27 carries, the lowest yards-per-carry average allowed by Clemson since holding Boston College to 0.3 yards per carry on Nov. 10, 2018. It’s the 18th time since 2014 that Clemson has held an opponent to 2.0 or fewer yards per carry, second-most in the country. Clemson is 17-1 in those contests.

Texas A&M scored its lone touchdown with six seconds remaining. Clemson was six seconds away from holding its opponent out of the end zone for the fourth time in its last 17 games, dating to the start of the 2018 season.

The 14-point win snapped Clemson’s streak of consecutive victories by 20 or more points at 11, one shy of 2018 Alabama for the longest such streak by any team in the AP Poll era (since 1936).

Quarterback Trevor Lawrence completed 24-of-35 passes for 268 yards with a touchdown. He also rushed four times for 11 yards with a rushing touchdown.

Etienne recorded a career-long 27-yard reception in the second quarter, surpassing his previous long of 24 against NC State in 2018.

Wide receiver Justyn Ross caught a career-high seven passes for a team-high 94 yards and a touchdown. His career high in receptions entering the day was six, set in both College Football Playoff games last season.

The touchdown pass to Ross was Lawrence’s 32nd career touchdown pass, tying him with Kyle Parker (32 from 2009-10) for seventh in school history.

Lawrence rushed for a one-yard touchdown in the second quarter, giving him a rushing touchdown in back-to-back games for the first time in his career.

Running back Lyn-J Dixon recorded his second rushing touchdown of the season on a four-yard rush in the third quarter.

Dixon has now recorded a rushing touchdown in back-to-back games for the second time in his career. He previously accomplished the feat against Wake Forest and NC State in 2018.

Safety Nolan Turner recorded the first forced fumble of his career in the second quarter. It was recovered by linebacker James Skalski, his first career fumble recovery.

The takeaway by Skalski gave Clemson at least one takeaway in each of Clemson’s last six games, dating to last season.

Muse becomes the first Clemson player to record an interception in each of the first two games of a season since DeAndre McDaniel, now a defensive analyst for Clemson, in 2009.

Clemson’s first play from scrimmage was a pass reception by tight end J.C. Chalk. Chalk is the grandson of College Football Hall of Famer Gene Stallings, who coached at Texas A&M from 1965-71. Clemson Head Coach Dabo Swinney played and coached under Stallings at Alabama.

Wide receiver Amari Rodgers made his season debut in the first quarter, 166 days after suffering an ACL injury during spring practice on March 25.

Texas A&M scored the first points of the game on a 32-yard field goal in the second quarter. It was the culmination of a 16-play drive, the longest allowed by Clemson since a 16-play drive by Louisville on Nov. 3, 2018, a drive that also resulted in Clemson holding its opponent to a field goal.

At 94 degrees, the temperature at kickoff was the third-hottest in Clemson history and the second hottest at Death Valley, trailing only a 95-degree game against Troy on Sept. 3, 2011. Two of the three hottest games in Clemson history have been against Texas A&M, including a 95-degree game at Kyle Field on Sept. 18, 2004. (Note: The temperature was 96 degrees at the start of the ABC broadcast prior to kickoff.)

The game was the sixth all-time meeting between Clemson and Texas A&M.

Clemson won its 17th consecutive game, dating to the start of the 2018 season, tying Clemson's all-time longest winning streak by matching a 17-game streak across the final three games of the 2014 season and the first 14 games in 2015.

Clemson attempting to win a sixth straight home game against SEC competition (def. Georgia in 2014, South Carolina in 2014 and 2016, Auburn in 2017, and South Carolina again in 2018). The current five-game home winning streak against SEC foes is already the longest in school history.

Clemson improved to 9-1 against SEC competition since 2016.

Clemson improved to 10-2 all-time in games as the AP No. 1-ranked team. Eleven of Clemson's 12 games played at No. 1 all-time have come during the Dabo Swinney era.

Swinney improved to 6-4 all-time against Texas A&M Head Coach Jimbo Fisher. The coaches were 4-4 against one another during Fisher's tenure at Florida State and Swinney is now 2-0 against Fisher with Texas A&M. Clemson has won five straight over Fisher-coached teams.

Clemson won its 19th consecutive game in the month of September, dating back to 2014. The streak is already the longest in school history.

Clemson led 17-3 at halftime and has now won 68 of its last 70 games when leading at halftime. Per ESPN Stats & Info, it marked the 18th time that Clemson had outscored its opponent by 14-plus points in a half since 2016, most in the FBS.

Clemson improved to 89-2 since 2011 when leading after three quarters. Clemson is also 89-2 when totaling more first downs than its opponent in that same span.

Clemson has now won 70 straight games when holding teams under 23 points, a streak that dates to 2010.