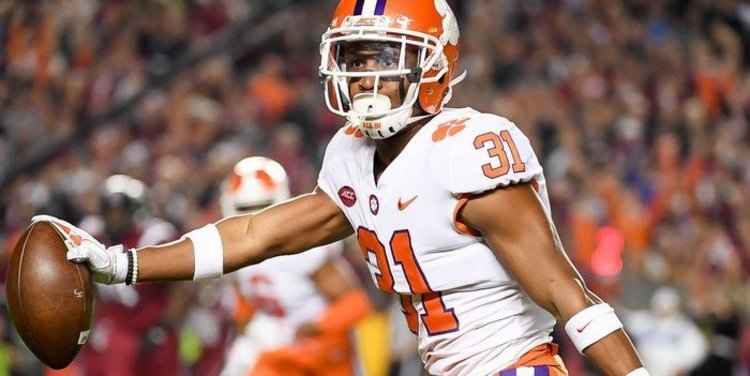 Clemson is 15-1 at night over the last two seasons, with eight of the wins coming against teams ranked in the top 25 of either the AP, USA Today or College Football Playoff polls.

Clemson is now 14-1 in true road games over the last two years.

Tonight was Clemson’s fourth road win over a top 25 team this year, marking the first Clemson team to amass that many top 25 road wins in a single season.

This was Clemson’s first win over a South Carolina team that entered the game with at least eight wins since 1988. South Carolina and Clemson were both 8-2 going into that game at Clemson, and the Tigers won 29-10.

Clemson had never beaten a South Carolina team in Columbia that entered the game with at least eight wins until tonight.

This was Clemson’s fourth straight win over South Carolina. This is the first Clemson senior class with a perfect record against South Carolina since the seniors of 2005.

Clemson is now 51-31-3 against South Carolina in Columbia, including 32-20-2 in William-Brice Stadium.

Ryan Carter had a 12-yard interception return for a touchdown in the first quarter. It was Carter’s second interception of the year, but his first career touchdown.

It was the shortest interception return for a touchdown in Clemson history. The previous shortest was a 15-yard return for a score by defensive lineman Carlos Watkins against Appalachian State in 2015.

Deon Cain has now caught a pass in 35 consecutive games, the ninth-longest active streak in the nation and just three games short of the school record of 38 set by Artavis Scott (2014-16).

Tonight was the third time Renfrow has had two touchdown receptions in a game, including each of the last two National Championship games against Alabama and tonight against South Carolina.

Kelly Bryant set the Clemson record for wins by a starting quarterback in his first season. Tonight was his 11th. Chris Morocco (1989) and Tajh Boyd (2011) had the previous record with 10.

Tee Higgins had three catches for 84 yards tonight and now has nine catches for 262 yards in the last two games.