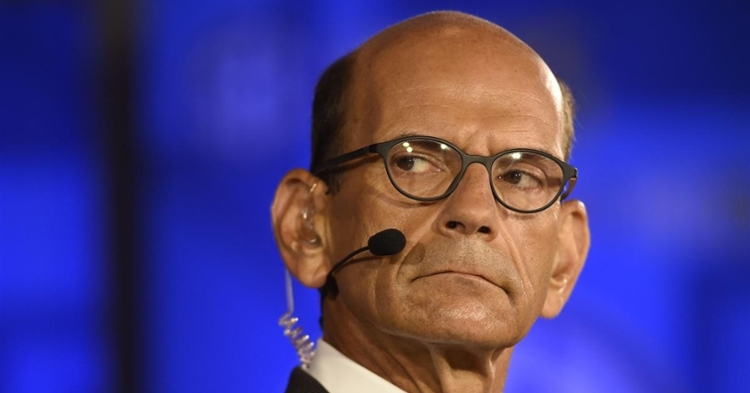 Paul Finebaum has found his smack talk groove of late as he called people making decisions on college athletics 'piles of manure', and now he is going after the NCAA President Mark Emmert.

"They say that Mark Emmert is a complete failure at leadership," Finebaum said during Friday's appearance on ESPN's Get Up. "First of all, it was nice of Mark Emmert to come out of the witness protection program yesterday to let us know what we should all know about the college football season. He is the president of the NCAA. He makes three and a half million dollars a year and him telling us there's a problem is like a meteorologist telling us during a hurricane that it's raining outside.

Finebaum calls for Emmert's firing over his lack of leadership.

"He is a complete, abject failure at leadership. He's been derelict in his duty, and quite frankly, I think he should be fired. We might wait for this storm passes to get rid of him, but he has no use whatsoever except taking up the airwaves with idiotic, inane and unimportant statements. The bottom line is that Mack Brown is saying what a lot of people are saying, college football needs leadership. They have five conference commissioners, but no one, no one is in charge."

Finebaum compared Emmert to a groundhog that hides in the ground.

"Emmert, like the groundhog, he just sticks his head up in the air to see which way the wind is blowing. He drops a statement out to the waiting media, and then he goes back into his hole or his bunker," Finebaum added. "That's not what this sport needs. "And frankly, the NCAA has really been deemed useless."

He discusses the NCAA at 6:33 mark in the following video: