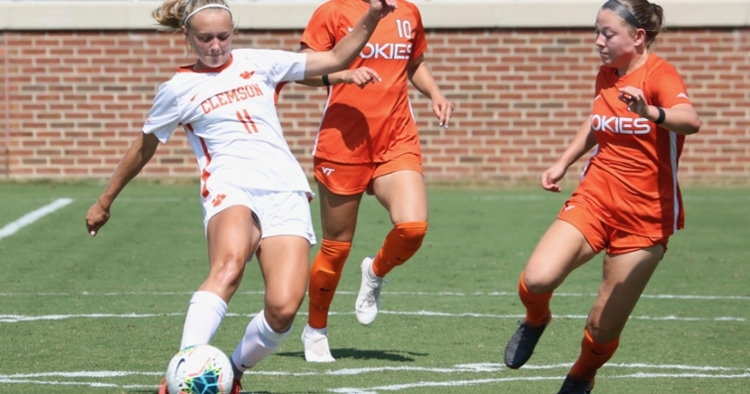 Clemson, S.C. - The No. 9 Clemson Tigers got back in the win column with a dominant 3-1 effort over the No. 16 Virginia Tech Hokies. Sunday’s win at home moves the Tigers to 8-1-1 on the season, 2-1 in the ACC and 2-1 against ranked opponents on the year.

“To come out and dominate the game like we did was fantastic,” Head Coach Radwanski said. “Our girls had a great mental approach, we were focused and had the right attitude for the whole match.”

Caroline Conti got things started for the Tigers with an 8th minute strike from just outside the six-yard box. However, despite outshooting the Hokies 15-2 in the first 45 minutes of play, the Tigers entered the locker rooms up by a 1-0 margin.

Midway through the second half, Maliah Morris added another goal to her freshman year resume after finding her own rebound inside the box. Her fourth goal of the year pushes her into a two-way tie with Mariana Speckmaier for the team lead for points with 10 through 10 games. Shortly after, Kimber Haley put Clemson up by three with a beautiful strike just underneath the crossbar, putting her on the score log for the first time this season.

Virginia Tech got on the board in the 88th minute after a foul in the box presented the Hokies with a penalty kick chance. Nicole Kozlova capitalized on the Clemson foul, scoring her team-leading fifth goal of the season.

As a team, Clemson dominated the attacking zone with a 26-5 shot advantage. The Tigers’ 26 shots on the afternoon is their second highest shot attempts in a game this season. Additionally, with Virginia Tech’s McGlynn accumulating 11 saves in the loss, she breaks her career high for saves in a game which she previously set at nine.

“It was a collective effort, but obviously our backend was fantastic today,” Radwanski added. “Our best form of defending today was us having the ball. I was really proud with our group and I was really happy with our depth.”

The Tigers hit the road for the next three games with three-ranked opponents on the ballot in North Carolina, Louisville and Duke. Clemson will return home on Oct. 19 as they host Syracuse at Historic Riggs Field at 7 p.m

That is another Tigers win on the season! Moving Clemson to 8-1-1! #WinTheDay pic.twitter.com/p4CBykvfCi