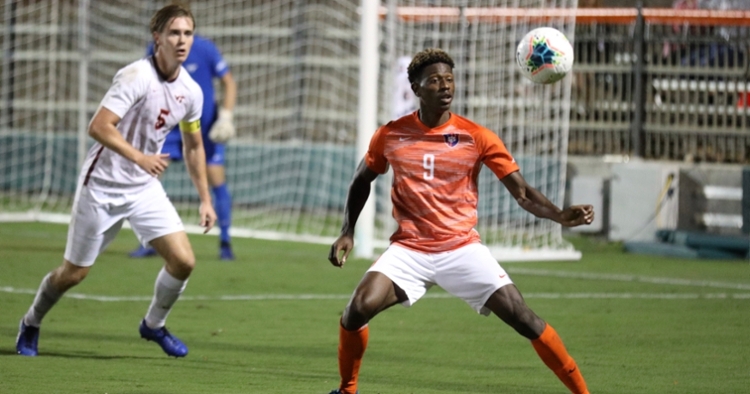 CLEMSON, S.C. – The 6th-ranked Clemson men’s soccer team battled for 110 minutes before ending in a 0-0 draw against the 22nd-ranked Virginia Tech Hokies at Historic Riggs Field.

Both teams struggled to capitalize on opportunities throughout the match, as the teams combined for 21 corner kicks and 30 shots. Clemson tallied 10 corners in the game’s first 45:00, but failed to convert of the chances, managing six shots (none on goal).

The Tigers’ Grayson Barber sent one wide on Clemson’s best chance in the first half in the 33rd minute, and the best opportunity in the second came when Kimarni Smith put one just over the crossbar.

Virginia Tech had the opportunity for the victory in the 105th minute, but the shot by James Kasak sailed high.

Clemson took a corner kick in the 109th minute, but had to settle for the 0-0 draw. The Tigers out-shot the Hokies 19-11 and turned in 14 corners to Virginia Tech’s seven. George Marks made two saves on the day for the Tigers.