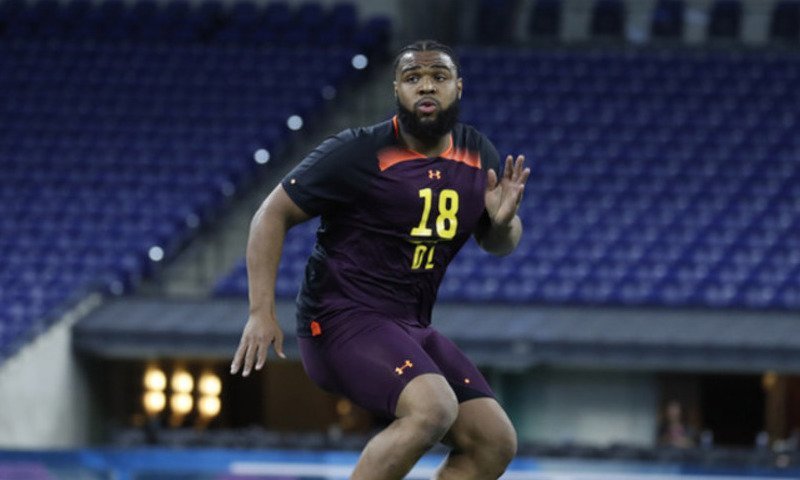 A number of former Tigers are competing to raise their draft stock in the next month-plus until the NFL draft in late April (25-27).

"People ask 'why do I have him as the top of these Clemson guys,'" Jeremiah said. "To me interior pass rushers are so hard to find, and he is so quick and explosive getting upfield. He'll get caught upright in the run game and toss to turn, but he's a disruptor and a penetrator."

Wilkins finsihed among the top half of his position group in the 40-yard dash (5.04 seconds) and bench press (28 reps).

A post-combine NFL mock draft Tuesday by Jeremiah sent Wilkins to the Tennessee Titans, at No. 19 overall.

Teammate Dexter Lawrence led all defenders and ranked second overall with 36 reps on the bench press, while fellow former Tiger D-lineman Albert Huggins finished third overall (35). Lawrence's measurables landed him among the top-12 most important numbers out of the combine according to NFL.com.

"Dexter Lawrence injured his quad on his first 40-yard dash attempt, but the body measurables we got on him help justify scouting takes that he has the potential to be a rare interior player," Cynthia Frelund wrote. "Lawrence's 84-inch wingspan is 7.5 inches longer than his height (he's 6-4 1/2 or 76.5 inches tall). With 34 3/4-inch arms and 10 1/2-inch hands, Lawrence's dimensions put him into a category where more elite and above-average players have come from."

Lawrence projected as the No. 31 pick by USA TODAY to the Los Angeles Rams.

The same USA TODAY analyst pegged Mark Fields as one of the combine winners after running one of the fastest 40s (4.37 official).

Clemson interior defensive lineman Christian Wilkins moves way to fluid for a 315 man. He is moving like a linebacker. Incredible!#NFLCombine pic.twitter.com/efuYUGkZoZ

Christian Wilkins posted an elite #RAS at the #2019NFLCombine with above average grades across the board.

Dexter Lawrence's 5.05-second 40-yard dash was the second-fastest time by a prospect that weighed over 340 pounds since 2003. Only Dontari Poe ran it faster at that weight (4.89). Lawrence was moving. #NFLCombine

Dexter Lawrence posted an elite #RAS at the #2019NFLCombine with a great size, speed combo. He did not complete explosion or agility.

Here's a look a the top defensive tackle performers from the 2019 class based on the Next Gen Stats Combine Score...

Clemson tackle Dexter Lawrence suffered a leg injury during his 40-yard dash, won’t participate in the rest of the workout, per @KimJonesSports