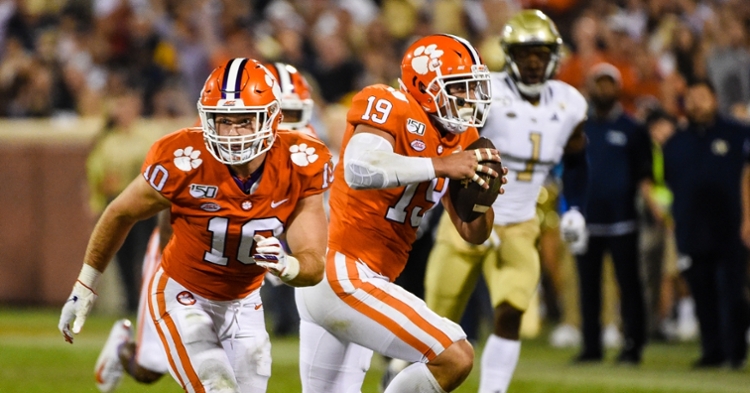 Former Clemson safety Tanner Muse is joining the Clemson West that is the Raiders.

He was picked with the 100th overall selection in the third round by Las Vegas late Friday.

Muse was named a third-team AP All-American and a Thorpe Award semifinalist as a senior after earning first-team All-ACC honors with 73 stops, five pass breakups and a team-best four interceptions.

He left school tied with Christian Wilkins, Cannon Smith and K’Von Wallace for the most career games played (59) with 39 starts and 1,921 snaps. The Belmont, NC native totaled 237 tackles, 10.5 for loss, with 15 PBUs, four sacks, seven INTs (one a pick-six) and a fumble return for a TD.

Muse was rated the No. 10 safety prospect in the draft by ESPN and No. 21 by CBS Sports.

"Tanner Muse was a workout warrior in addition to being a guy that can help you on special teams," ESPN's Mel Kiper Jr. said. "He made a lot of plays in that defensive secondary. He came up and played as a linebacker in a lot of ways. This kid has dual potential. He is going to be a big-time special teams player. He is all over the field and very instinctive. Good tackler. They lined him up in a variety of ways there at Clemson. You are getting a guy like Hunter Renfrow. They hit on him (Renfrow) last year."

In addition to Renfrow, he joins Trayvon Mullen and Clelin Ferrell, who were all picked by the Raiders last year.

Muse's contract is set to be worth $4.1 million with a $833K signing bonus, per Spotrac.

He is the fourth Clemson selection of the 2020 NFL draft, in addition to fellow defenders Isaiah Simmons (8th; Cardinals) and AJ Terrell (16th; Falcons) and receiver Tee Higgins (33rd; Bengals). The draft continues with rounds 4-7 at noon Saturday on ESPN and NFL Network.

Became the 61st player to have played for Head Coach Dabo Swinney to be drafted into the NFL, including the sixth third-round pick of Swinney’s tenure.

Became the 15th defensive back (and sixth safety) selected in the Swinney era, dating back to the 2009 NFL Draft.

Was the 10th Clemson player selected by the Raiders all-time, including an AFL Draft and Supplemental Draft selection. Prior to last year, the Raiders had gone nine years since their most recent selection from Clemson (Jacoby Ford in 2010). The Raiders have since drafted four Clemson players across the 2019-20 drafts.

Gave Clemson selections by the Raiders in back-to-back drafts for the first time since 1992-93, when the then-Los Angeles Raiders selected DT Chester McGlockton and CB James Trapp in consecutive drafts.

Made the Raiders the first team to select four Clemson players in a two-draft span since the New York Giants in 1983-84.

With the 100th pick, we have selected LB Tanner Muse from @ClemsonFB. pic.twitter.com/X07QoGBPCL

Players the Raiders now have drafted from the one national title game between Clemson and Alabama:

Another Tiger is headed to Clemson of the West aka the Raiders! ????@tanner_muse ??@Raiders#NFLDraft pic.twitter.com/RdLLbIs0yr

There's just something about that @Raiders x Clemson connection! ????