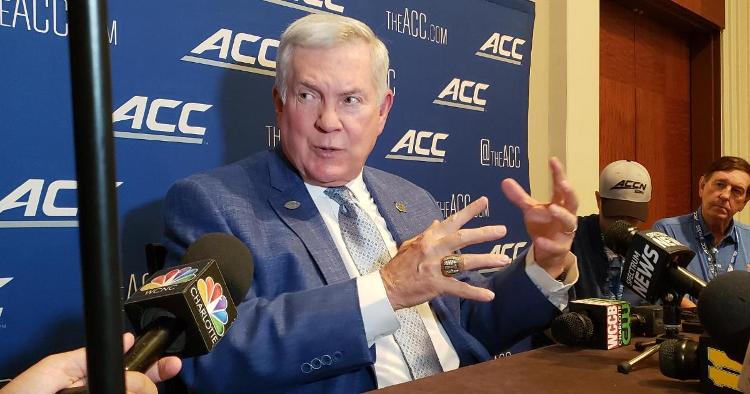 It was the fifth division crown in a row for the Tigers, and they now have scored 55 points in three straight games for the first time in school history.

Clemson is hitting on all cylinders offensively combined with their always salty and tough defense.

North Carolina Mack Brown held his weekly press conference on Tuesday and was asked about Clemson's No. 5 ranking in the College Football Playoff.

“I was worried when we started the playoff and the committee that it would push coaches to beat somebody as badly as they could. And I think it does. Right now, everybody is trying to impress the committee, and the difference in the No. 1 spot and the No. 2 spot is huge because of where you play. It’s huge, it’s not big, it’s huge. You get that ‘home-field advantage’ if you’re No. 1. The other thing that you look at, I called Clemson losing to Syracuse. I think they were in the playoff that year. I saw them lose to Pittsburgh and might have won the national championship that year, so Clemson normally doesn’t play as well early as they do late.

Brown thinks that Clemson has been judged poorly based on one game, but they are every bit as good as LSU or Ohio State.

"I think we’ve been very, very unfair to them and I think it’s because of our game. I think people thought, ‘Well, we were bad enough when that game was close. Clemson must not be any good.’ That’s very unfair to them because they’ve played some close games early, but to me, Clemson’s right in the middle of that LSU [and] Ohio State conversation. I don’t see how they possibly couldn’t be as many games as they’ve won and as good as they are on both sides of the ball. They’ve had a lot of young guys, but if you look at Dabo’s [Swinney] teams, they get better as the year progresses every year."

Brown knows that Dabo Swinney will get his team ready for the 'championship phase' of the season which is when teams should be peaking.

"Everybody better look out because I think they’ve got a strong trend up. As a coach, you don’t even have to say it. They know when they say they’re fifth. ‘We’re fifth? What do you mean we’re fifth? We’re undefeated, man. We won 31 straight games.’ That’s motivation enough. All you have to do if you’re Dabo is walk in and say, ‘Guess they don’t think we’re very good. Maybe they’re right. I don’t know, we’ll see Saturday night.’ That’s all you have to do. It doesn’t take much."